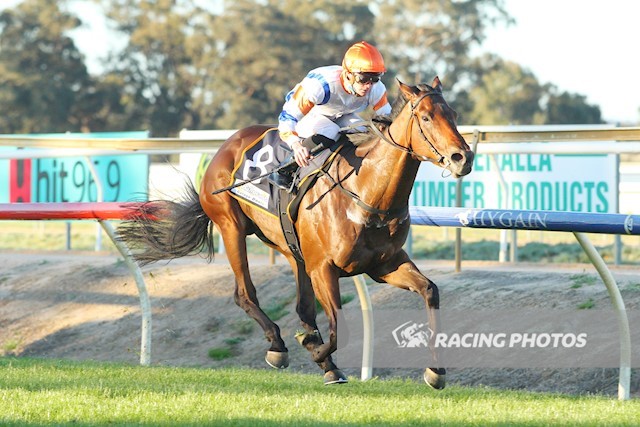 Bold front runner My Boy Birmingham raced his way to Flemington with an authoritative win at Benalla on Sunday, September 26.

Trained by Tony & Calvin McEvoy, My Boy Birmingham qualified for the $500,000 Melbourne Cup Carnival Country Cup Final (1600m) at Flemington on Thursday, November 4 with his win.

Backed from $8 to $6, the four-year-old raced away from his rivals at Benalla to win the Ryan & McNulty Sawmillers MCCC Series Heat 1 (1406m).

Jockey Blaike McDougall had him away well from gate 10 but kept him wide to get into a good rhythm before crossing down to the inside rail approaching the turn into the home straight.

“He is building an impressive record,” McEvoy said.

“It was good today to see him take his form from the synthetic to the grass.

“My Boy Birmingham now has four wins and a second from just six starts.

“His only unplaced run was on the turf at Morphettville but today he looked right at home.

“There is no doubt he likes firm surfaces.”

McEvoy said the Flemington Cup final would be the next run for the four-year-old.

“He has shown that he likes to have his races spaced and the Flemington race is about 5-1/2 weeks away.

“He is a good advertisement for McEvoy Mitchell Racing as he was bred by Wayne (Mitchell).

“As a young horse he was a little unruly but with age and maturity he is getting better and his form is outstanding.

“I was very pleased with Blaike’s (McDougall) ride.

“He is a good jockey from the Riverina who is putting his toe in the water in Victoria, and I thought it was an intelligent ride today.”