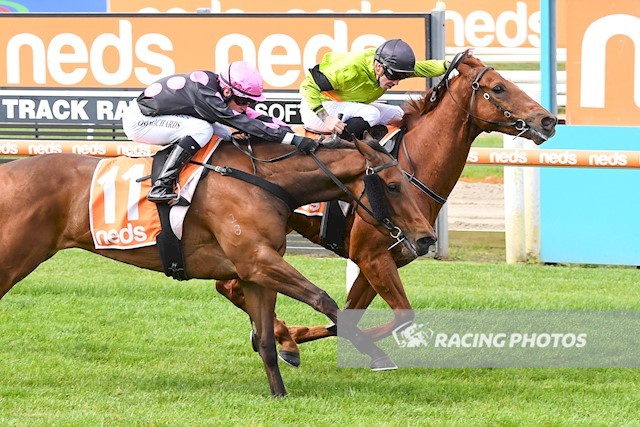 Not just thinking but doing

A $5 chance, the gelding began nicely, and Holland was able to settle him one wide, trailing the lead pair.

On the home turn a gap appeared and Think Winning sprinted after the leaders quickly gathering them in.

Just when he was being hailed the winner, Testa Rock ($11) dashed up and looked likely to run him down.

But Think Winning had other ideas responding to Holland’s urgings to grab victory by a neck with Love Takes Time ($3.40) 1-1/2 lengths away third.

Tim Hanley, stable foreman for the McEvoys, said it had been a tough win.

“It was very pleasing to see this horse win like he did today,” Hanley said.

“He got him into a perfect position and got him out at the right time, and the horse dug in deep late.”

Hanley said there had been good stable confidence for a victory.

“Tony and Calvin were very pleased since he had come out of his first up run.

“His trackwork had been impressive and it looked an even sort of a race.

“He has always been quite a difficult horse to handle and was always going to take time.

Hanley said he believed Think Winning would keep getting better.

“He will keep on improving as he goes, and the more he relaxes he will get out to at least a mile (1600m).

“It’s onwards and upwards for him.”

“They’ve given me opportunities when I wasn’t going that good,” Holland said.

“It’s nice to reward people who give you the opportunities by getting winners for them.

“He’s not an easy horse this bloke but we got him over the line.

“He really deserved it, he’s had a few goes now.

“Look he’s won a race, but I felt his first up run we had seen the better side of him.

“He still threw his head around and did a few things wrong.

“It was a slow run race but everything panned out from the 600 (metre mark), he was too good.”

Holland said he had been a bit worried when the runner up came alongside.

“When I let his head go, it went up, not because he wasn’t trying, he just has that big extravagant action.

“It was a matter of trying to get him to put his head down, he had his ears pinned back so he was trying.

“He’s a bit dorky with a big high action but I always felt I was going to beat it off.”