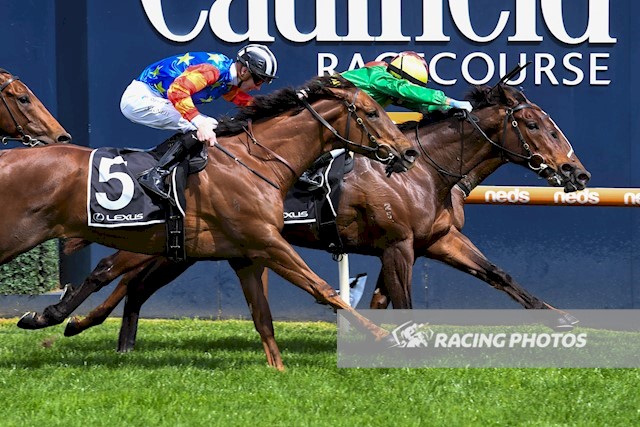 Savatoxl back with a bang

Northern Territory superstar Savatoxl resumed from a spell with a gutsy last stride victory in the Group 2 $300,000 Lexus Schillaci Stakes (1100m) at Caulfield on Saturday, October 9.

After coming to the McEvoys as a potential middle-distance galloper, Savatoxl has developed into one of Australia’s most under-rated sprinters following his Group 1 Goodwood Handicap at Morphettville earlier in the year with his stakes closing in on $1m sitting on $914,540..

At Caulfield, the lightly weighted Dosh went out strongly and took a lead of several lengths from the chasing Savatoxl.

Dosh ($10) kept running up the home straight, but Savatoxl ($6) answered jockey Luke Currie’s hard riding to grab the leader on the post.

The winning margin was a short half head with Bella Nipotina ($3.90) a head away third.

Trainer Tony McEvoy was impressed by the desire to win of Savatoxl.

“What a culture that is.

“We’re excited to have him back as well as that.

“He was doing everything so easy (in training) that I thought he may have needed it (the run).

“That was a strung out race – they went quick, and he just showed how tough he is.”

McEvoy said it had not taken him to long to work out sprinting was Savatoxl’s forte.

“He came to me in such great order, and in form, so we tried a couple of times at 1400m but at this level I knew pretty soon that he needed up to 1200 max and he’s turned out a great horse for us.

“The guys in Alice (Springs) had such faith in this horse, and I’m so pleased they made the phone call to send him down to us.”

Winning jockey Luke Currie said it had been an excellent first up victory by the six-year-old gelding.

“We went out with the idea to press early,” Currie said.

“But Dosh was so quick and Mick Dee on him seemed to have a handful of horse, even early, and he was getting away from us.

“We were chasing most of the way.

“I thought the leader might stop but with the light weight it kept going.

“We were lucky enough to be close enough and be able to grind away and just get it on the line.

“He only had the one trial going into it so whatever he did today he was going to improve off.

“It was a tough effort to chase that speed and keep going so he is on the right track for the Manikato.”