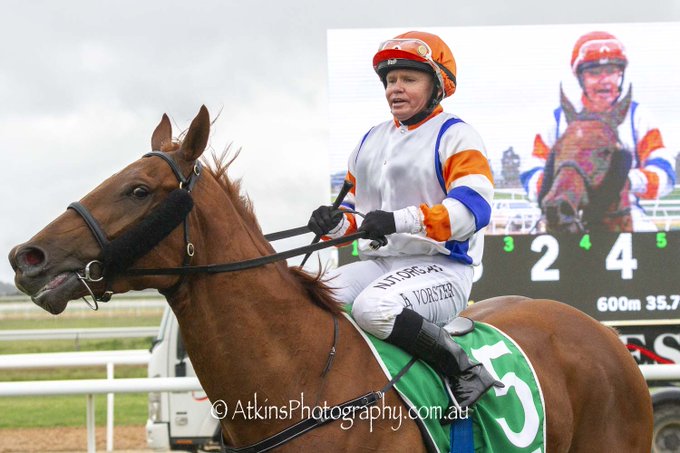 Talented mare Ruler By Choice notched her third win from just seven starts with a tough effort at Murray Bridge on Saturday, August 8.

With a gear change of winkers on, the four-year-old mare wanted to race keenly but was still too good for her rivals in the Spry Civil Construction Benchmark 68 Handicap (1200m).

The daughter of Choisir began very quickly and Vorster settled a little wide in the run to home turn as Ruler By Choice took the lead.

Although left in front up the home straight, the mare showed a lot of heart on holding off her challengers.

“She is doing a good job,” McEvoy said.

“She was as little bit casual in her work during the week, so we decided to go with the winkers on.

“They nearly backfired as she was very strong and took off a bit early in the race.

“Barend did a great job doing his best to get her to travel nicely underneath him.

“She got it pretty well in front, really kicked well and found another gear in the straight.

“She is a big stretchy mare and has always shown us a good amount of ability.

“She just knocked up a bit at her run at Swan Hill before coming back to Angaston.

“Back home, the mare has trained on beautifully.

“We were going to step her up in trip after today, but on how she ran, we might have to keep her at the same distance for another one.”

Winning jockey Barend Vorster said the race had not gone completely to plan.

“I would have liked to have a trail early, but she had other ideas,” Vorster said.

“She pinged the gates and I tried to get in behind but within a couple of strides she was having none of that.

“She just wanted to stride along.

“I just went with her and tried to keep her as comfortable as I could.

“I tried to wait to go as long as I could but at the 300 metre mark I thought I was a goner.

“I straightened her up and she kept on fighting, and she won without a smack today.

“With the winkers on she was a little over keen but with the run under her belt I think she will settle better.”