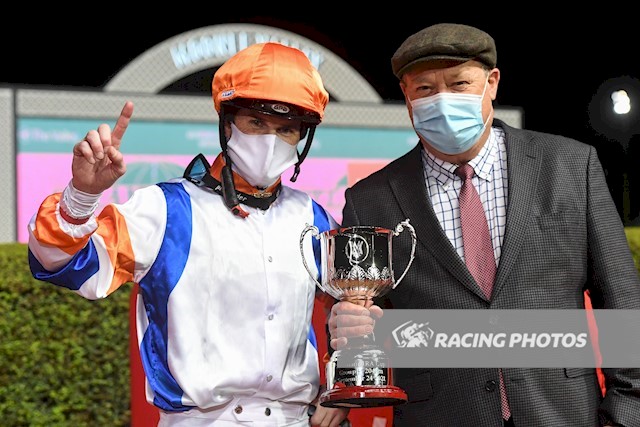 No secret, Blaze is a Cup winner

The rehabilitation process of McEvoy Mitchell Racing received a huge tick when Secret Blaze won at the season-opening night meeting at Moonee Valley on Friday, September 24.

Backed from $8 into $5.50, Secret Blaze was given the run of the race by Craig Williams in the Group 3 Steamatic JRA Cup (2040m) before drawing clear in the home straight to win by three-quarters of a length.

Trained by Tony & Calvin McEvoy, the six-year-old ran down Homesman ($4) with Rostropovich ($31) a half-length away third.

Despite his age, the Cup win was just the 30th start for Secret Blaze who has an impressive record of seven wins and eight placings earning $711,400 in stakemoney.

The gelding had a year off with a tendon injury and the win was his fourth run back from the enforced spell.

Williams had the gelding away well from an inside draw and settled third on the fence and had a comfortable run on a solid tempo.

He was able to ease off the fence turning for the home and Secret Blaze extended strongly to grab victory.

Trainer Tony McEvoy was overjoyed to see Secret Blaze back in winning form.

“It was a pretty good watch,” McEvoy said.

“Craig (Williams) thought he would get the run of the race from gate three and he did that.

“I’m just so pleased for the horse.

“He’s come back from a tendon setback; he is such a great gentleman to deal with and he’s been a great patient the whole way through.

“It was lovely to see him get back to win at this level.

“We have trained him on strong and he went for a couple of gallops away from home.

“He’s a great athlete and it was a pretty easy task to keep him up to the mark.”

McEvoy said it was a dream that the stable might be able to get Secret Blaze to a start in the Caulfield Cup.

“It is the dream but there is a stack of races around for this fellow.

“He can now go to the Coongy, or the Herbert Power, or maybe even the ‘Big Dance’ (Caulfield Cup) but it was just lovely to get him back in form.

“My team at Angaston and here in Melbourne have done a fabulous job of getting him back.

“My vets and the rehab program we have in place have all worked, and he is sound as a bell, just fabulous.”

“It was quite interesting along the side because the lead horse was off the fence,” Williams said.

“I was really going to look at chancing my arm to go in there, but Linda (Meech) corrected her horse, then we had to come out and wait.

“What I loved about this horse was the preparation that Tony McEvoy and his team, and obviously the people prior to that when he was off with an injury to get him back and be patient with the horse.

“I was very fortunate that my manager got me on the horse.

“He was really impressive tonight around the Valley.

“He’s got a really good profile through his career, and he is a gentleman to ride.

“The barrier draw helped, the light weight, the preparation, the confidence from Tony McEvoy and his stable, he quickened around the bend and beat a handsome field tonight.”