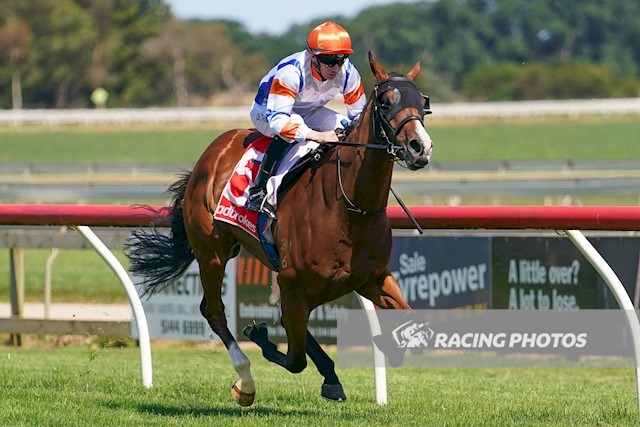 Starting a hot $1.65 favourite, the four-year-old mare, trained by Tony & Calvin McEvoy, was taken straight to the front by jockey Damien Thornton to lead throughout in the Quest Sale Benchmark 64 Handicap (1732m).

Night Passage scored comfortably by three-and-a-half lengths from I Am A Hit ($5) with Kurgan ($61) a length away third.

It was her second win with three placings from just 10 starts.

A daughter of Not A Single Doubt, the mare bowled along in front for Thornton and extended nicely turning for home and victory never looked in doubt.

Michael Shepherdson, Melbourne stable foreman for McEvoy Mitchell Racing, said the win would have been a confident boost for the mare.

“She did a good job,” Shepherdson said.

“It was probably not quite the way to ride her, but it looked a really nice race for her, and Damien was keen to grab the race by the scruff of the neck.

“He was able to control it nice through the run and built in nicely to the corner and gained a good break.”

Night Passage had some gear changes today with the nose roll off and blinkers on again.

“She is still all legs and a bit gangly,” he said.

“Although she has had a bit of racing, she is still learning.

“As we come up in grade, we might be able to ride her a touch quieter.

“I’m sure she will probably be better getting a tow into the race.

“We are confident in her ability and it was good she was able to control from the front today.”

Shepherdson said the stable would look to take Night Passage through her grades and keep her confidence up.

Winning jockey Damien Thornton said the win was impressive, but the mare was still learning.

“She was good,” Thornton said.

“She jumped well, and Tony wanted to be behind the speed but as it turned out there was no speed.

“It became us by default.

“She travelled pretty comfortably in front and I was always confident she would give a good kick.

“She floated a little bit out in front so she would have been better with something to chase.

“She wanted to hang in on top of the rail which is a little concern but all in all she did the job really well.”