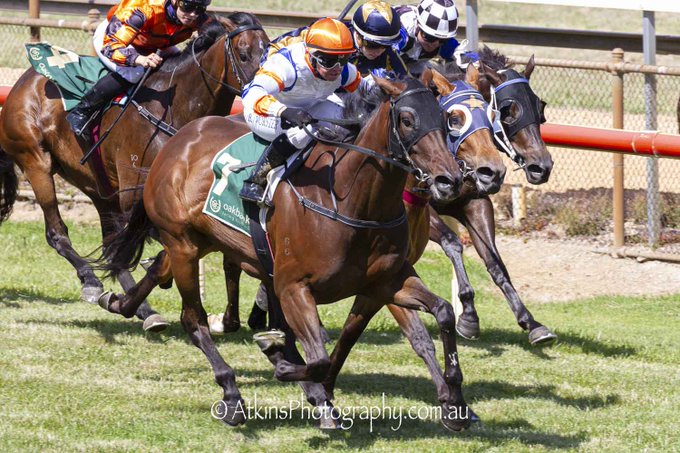 Beautifully bred mare Recognise looks like she is starting to reach her best form with maturity.

At Oakbank, on Wednesday December 23, the four-year-old mare delivered her connections a Christmas present with victory in the Adcock Real Estate Maiden (1400m).

After opening at $2.50, Recognise was continually supported starting a $1.75 favourite.

Trained by Tony & Calvin McEvoy and ridden by Barend Vorster, the four-year-old mare finished best to score a length win from Aqaareb ($9) with Whiskey ‘n’ Women ($31) a similar margin away third.

Despite the comfortable margin, Vorster was forced to work hard to land Recognise a winner.

The mare began well but the jockey had to ride her along to hold fourth spot in the early stages.

Recognise didn’t look completely comfortable coming down the hill but once she balanced up started to extend nicely.

Approaching the 200 metre mark, the mare started to duck in, and the jockey switched the whip to his left hand.

Once he did, Recognise really extended and grabbed the leaders to win nicely.

Finn McCarthy, SA stable foreperson for McEvoy Mitchell Racing said it had been a good win by Recognise.

“She maybe felt it a bit sharp today,” McCarthy said.

“Her last start they went a bit slower and she was on the bridle.

“They went along at a good speed today.

“She took a bit to get going around the bend.

“Once they got to the straight, she balanced up and was very strong.

“At her last start when she got under a bit of pressure she tended to start laying in up the straight.

“We put the near side blinker on today to hopefully straighten her up a bit and it seems to have done the trick.

“She looks like she wants a bit of ground and we might look to getting her out to 1600 metres next start.

“Recognise is a half-sister to Mr Quickie so there is plenty of stamina in the pedigree.”