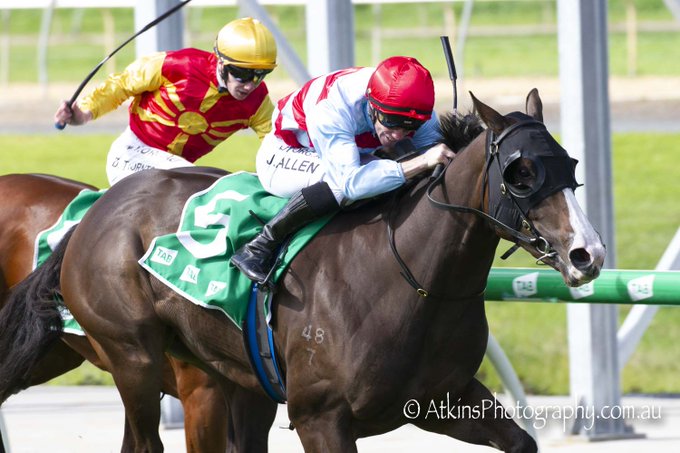 Trainer Tony McEvoy has created an amazing record in the Group 3 South Australian Sires Produce Stakes (1400m) in South Australia with Ringbolt giving him his fourth winners from the past eight around Morphettville Parks on Saturday, May 9.

And for the second year in a row, he supplied the quinella.

Today’s win would have been extra special because it was the first time in the race, he has been in a training partnership with his son Calvin.

Violinist was ridden up to lead and Allen had no hesitation taking Ringbolt up to sit outside the filly.

In the home straight, the Kildalton Park pair drew clear with Ringbolt proving too strong.

Trainer Calvin McEvoy was delighted with the stable quinella.

“He (Ringbolt) was fantastic,” McEvoy said.

“He was a bit of a drunken sailor at Balaklava (when he ran fourth on debut) and we elected to go with the blinkers.

“We only gave him one bit of work in them and he pinged the gates and always on the bridle for Johnny (John Allen).

“He’s a really nice horse and is part-owned by Robert Hill-Smith who is a very dear friend of the family and is from the Barossa Valley.

“Hopefully he’ll be at home with a glass of vino to celebrate.

“Ringbolt has got a lot of upside and he’s going to get better and better when he gets older, and probably out to a mile (1600m).”

“Even though he got beaten on debut at Balaklava I thought watching his replay I really liked his run,” Allen said.

“I thought he was going to improve.

“He was a different horse today with the blinkers on.

“He was good and strong.

“When there wasn’t a lot of speed I just rode forward and sat outside the lead.

“I didn’t want to get to the lead too soon as he is still a bit green.

“Once he got there, he put them away and probably had a little bit up his sleeve.”