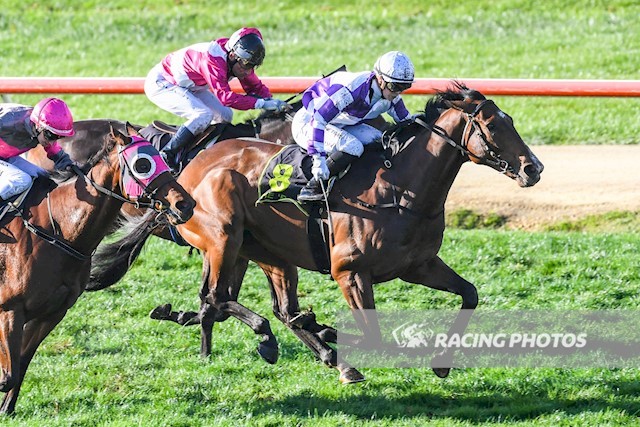 Stable favourite Frankie Pinot scored the biggest win of his career storming to victory in the Listed $200,000 The Midfield Group Wangoom Handicap (1200m) at Warrnambool on Wednesday, May 4.

The victory gave trainers Tony and Calvin McEvoy their first success in the time-honoured feature sprint, nicknamed “The Newmarket of the Bush’  at the three-day Victorian carnival.

Apprentice rider Madison Lloyd created her own piece of history on Frankie Pinot ($21 into $12) which scored by half a length from last year’s winner Inn Keeper ($10) with Showmanship ($7) a neck away third.

Lloyd is the first female apprentice to win the feature Wangoom Handicap, and only the second of her gender equalling Linda Meech.

Frankie Pinot has been a model of consistency since stepping onto the racetrack and his record now stands at six wins, seven seconds and two thirds from just 17 starts.

He has been a star for owners Ann and John McDonnell who also bred the five-year-old.

Frankie Pinot was resuming from a spell in the Wangoom.

After jumping well, he drifted back to second last in the run to the home turn.

Lloyd then angled Frankie Pinot between runners and came to the centre of the track turning for home.

The gelding moved between runners to take the lead at the 200-metre mark then holding off all challengers.

Trainer Calvin McEvoy was ecstatic to win the Wangoom, the feature sprint during the Warrnambool carnival.

“It is really exciting,” McEvoy said.

“We try to get winners here each year and it is really hard to do.

“What a horse, we thought today would be short of his trip, but we knew he would love the ground.

“When it was downgraded to a (heavy) 10, we were pretty happy.

“It was a beautiful ride by Maddie (Lloyd) and well done to the McDonnell family.

“John and Ann are really keen on how Maddie rides the horse, and how he goes for her.

“They were really keen to stick with her and it was lovely to see.

“Maddie rides him every day at home and does all the work.

“There was a point in the race when she could have kept going out, but she saw the gap inside where you could have driven a truck though.

“She went through it, and it was the right call.

“It was a great effort by all team at Ballarat and Angaston, they work really hard.”

Winning jockey Maddie Lloyd was still in a bit of shock post-race.

“I can’t thank the connections and Calvin and Tony enough.

“This horse means a lot to me, he’s really done good for me – three wins and a second on him now.

“He is really a special horse to me.

“Frankie actually jumped quite good today, put himself there.

“He tailed off a bit in the middle stages.

“Round the corner I was ducking and weaving trying to find some way through.

“He relishes this ground, and geez, didn’t he let rip.

“I honestly can’t believe it.”