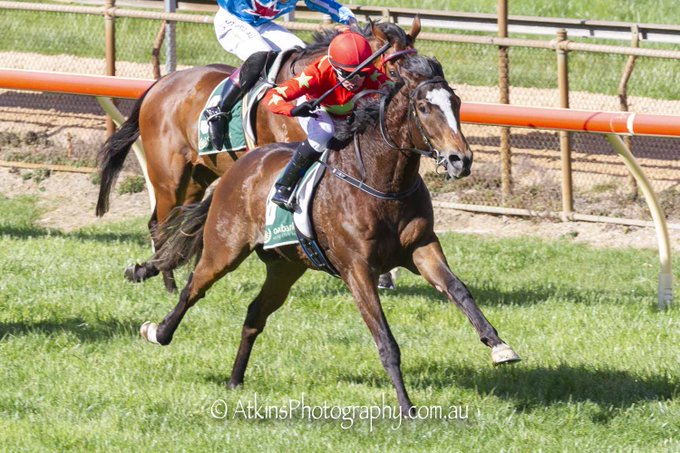 Debutant Chief of Army charged home ahead of his rivals to make a winning debut at Oakbank on Sunday, September 13.

Backed from $2.80 to start $2.30 favourite, Chief of Army, trained by Tony & Calvin McEvoy, and ridden by Barend Vorster, cleared out over the final 200 metres of the Thomas Foods Maiden (1400m).

Vorster allowed the newcomer to settle midfield in a truly run event.

He kept Chief of Army out wide coming down the hill where the gelding didn’t look comfortable, but once in the home straight he lengthened superbly to run powerfully through the line.

Trainer Tony McEvoy said Chief Of Army had been impressive.

“I have to say he surprised me today,” McEvoy said.

“He is a big immature horse that hasn’t come into his body completely.

“He hasn’t shown us anything like that at home but in a race he has really stepped up.

“Chief Of Army is owned by a group from Singapore headed by Boon Chua, who is a good friend of Barend.

“The owners are in form – they had a Group 1 winner in Singapore recently and also had a winner yesterday.

“I was actually thinking of giving Chief Of Army time on the spring grass to mature, but the owners pleaded with me to give him a run and I picked out today’s race.”

McEvoy said the gelding had looked uncomfortable coming down the hill but had really lengthened impressively.

“I’ll see how he comes through the race before deciding his immediate future.”