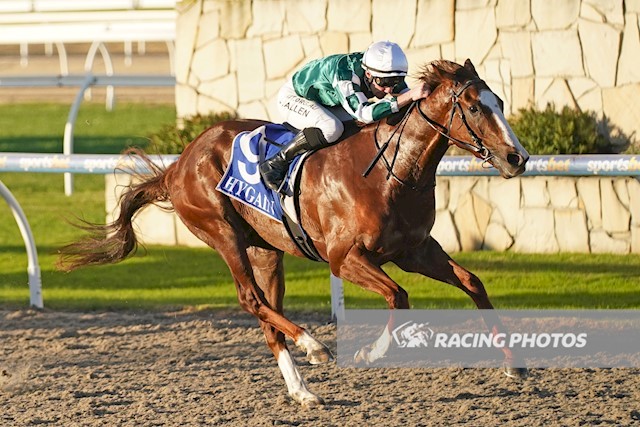 Yulong Justify stamped himself as a three-year-old with potential following his win on the Pakenham Synthetic on Monday, June 28.

Sent out a well backed $2.70 favourite, the three-year-old was ridden by John Allen who had him away from gate nine and across sitting second after the early battle for positions.

Yulong Justify settled well then lengthened from the 400 metres when Allen asked him to extend in the drive to the finish.

The gelding responded and ran through the line strongly winning by 2-1/4 lengths from Field of Roses ($8.50) with Dominus ($7.50), a length away third.

“He still has a few creases in his manners pre-race and at the gates,” McEvoy said.

“But what he did today gives us hope he has much better races in store.

“Credit to our team including Finn (McCarthy) and Tim (Hanley) who have put in plenty of time to get him used to the barriers.

“He has been a long-term project but is getting better.

“We took him to the Pakenham Synthetic for his debut on May 31 and he won well.

“He is an athletic horse, so we gave him time to get over the outing and picked out this race at a track he knew.

“I will see how he comes through the run before deciding to give him one more, or a break.”

“I don’t think he would start on a badly rain-affected track, but he has shown a definite liking for the good going of the synthetic track.”