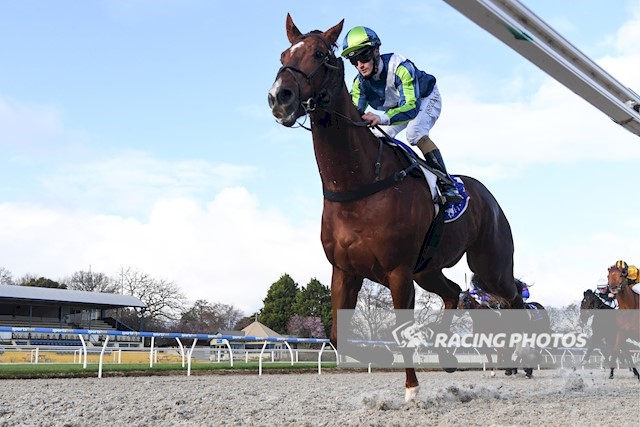 Vahash ensured it was McEvoy Monday on the Ballarat Synthetic on Monday, August 16.

The six-year-old was the fourth winner for the day for trainers Tony & Calvin McEvoy when he took out the Hygain Winners Choice Benchmark 64 Handicap (1400m).

Red Hawk, Star of Chaos and Toyz On Fire had been the stable’s other winners and Vahash never looked like letting the stable down.

Richards had the gelding away well, finding the front and rating him perfectly kicking away in the home straight.

Trainer Calvin McEvoy said it had been a fantastic day.

“Credit to the staff, they do a brilliant job both here in Ballarat and also in South Australia, and these horses couldn’t have presented in better order than they did today and they were brilliant,” McEvoy said.

“We have worked out the key is the ground with this horse.

“I don’t think he is a pure poly horse, when we get him on good turf he will be just as good.

“Thanks to the owners, Darren Thomas, Pilko (Mark Pilkington), Dean Fleming, it’s been a long old ride with the horse, but he is starting to repay them now.

“He continued to go sore as a younger horse, soundness issues, but we gave him a really long spell, 12 months off.

“Time is a beautiful healer and he’s come back in terrific order and is lovely and sound now.

“We are very lucky to train here at Ballarat, it is a really good facility, they look after us well and being able to work on that beautiful surface every day gives us a nice edge come to race day.”

Josh Richards, the winning rider, said it had been a comfortable win.

“The stable is in form, a nice horse in the right race,” Richards said.

“He jumped, they left him alone and there was no pressure put on him at all.

“I thought it was quite easy, no pressure, he was just lobbing along really nice and just built up into it.

“It was just a matter of putting him through his gears and he found the line.

“He’s a nice big horse and they’ve given him time and I’m sure they will put him through his grades.”

Vahash now has a good record of fours wins and a placing from just nine starts and looks ready now to build on that record.