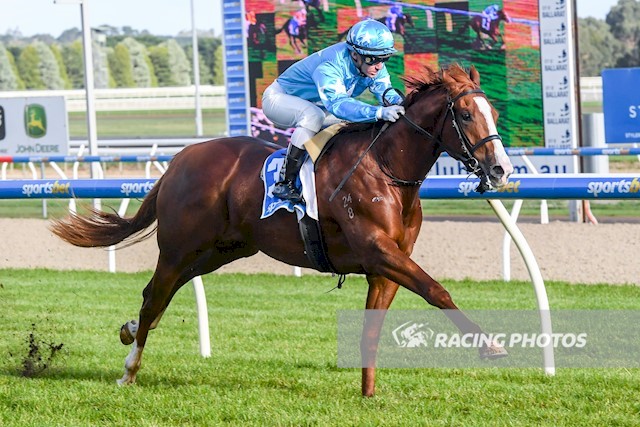 Improving two-year-old Three Kings demonstrated his class with a brilliant win at Ballarat on Sunday, April 11.

Trainers Tony & Calvin McEvoy have always had a good opinion of the gelded son of Sebring, but it has taken three races for him to break through on the track.

Three Kings ran an odds-on favourite on debut at Morphettville on Adelaide Cup day, March 6 but could only finish fifth in a 1000 metre event, finding it too short.

The trainers sent him across to their Ballarat stable and lined him up over 1300 metres at Sandown on March 31.

After settling back in the field, the gelding ran powerfully to the line just going down in a photo finish.

Three Kings showed the benefits of those run at Ballarat.

Turning for home, Currie asked the gelding to sprint, and he dashed away from his rivals scoring easily by 2-1/4 lengths.

Camaguey ($4.20) which had a trail on the winner couldn’t match him in the home straight but finished second, a long neck in front of Morrissette ($19).

Trainer Calvin McEvoy said it had been great to see Three Kings produce on race day.

“As we discovered, he found the trip too short on race debut,” McEvoy said.

“At Sandown he just bottomed out on his run stepping up in trip but was excellent, today he was spot on.

“Luke was able to control the tempo sitting second, and the horse did the rest.

“We will see how he comes through the race but hope to line him up at Flemington on Anzac Day (April 25).”