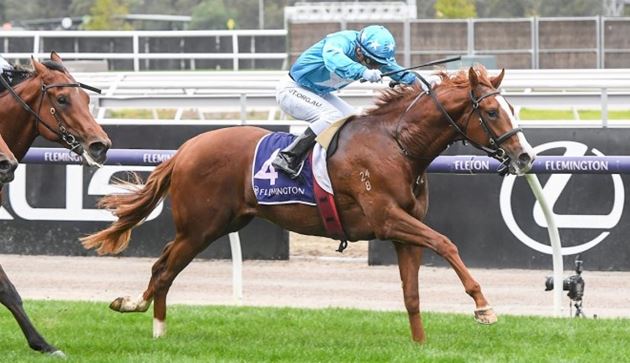 Three Kings may now be given the chance to add further black type in the Group 3 South Australian Sires’ Produce Stakes (1400m) around Morphettville Parks on May 8.

The colt is trained by Tony & Calvin McEvoy who have a big opinion of him.

Calvin McEvoy said the horse would tell them if he could handle another run.

“If we could get him back home, on the farm on the river, he doesn’t have to be trained for that, he’ll stay at 1400 metres and it looks a nice race,” McEvoy said.

“If he bounces through this then that’s where we’ll go. If he feels it and needs a break he’ll go to the paddock.

“This was a big step up, but it is an opinion of the horse we’ve had for a long time.”

It was a magic ride by Currie to land Three Kings a winner at Flemington.

He had the colt smothered up on the fence midfield early, then when he came into the straight found himself in a tight pocket.

After looking to go in, and out, Currie finally was able to find a gap and he pushed Three Kings ($6) though and he sprinted strongly to score a long head win from Biscayne Bay ($10) with El Rocko ($26) a head away third.

“He’s a horse on the way up. To fight like that (at Ballarat last start), and I rode him the start before at Sandown, I thought today he could measure up, for sure.

“I think he’s that type of horse going forward. I think he’s going to be better when he gets out to the mile. He’s doing it the right way.”

The Anzac Stakes has been a race for good horses with previous winners including Vassilator (2018), Merchant Navy (2017) while Super Seth, winner of the 2019 Caulfield Guineas, finished third to Chaillot in 2019.