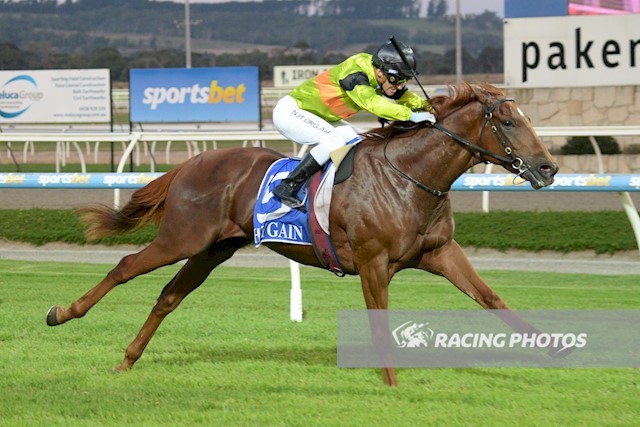 Think Winning, a horse with a personality, showed his talent with an impressive win at Pakenham on Thursday, April 1.

Pre-race, the four-year-old was happy to play games being reluctant to leave the mounting yard, then taking coaxing to make it around to the starting stalls.

Connections and his backers were happy he did as Think Winning raced away with the Kaduna Park Estate Maiden (1400m).

The Tony & Calvin McEvoy-trained son of Exceed And Excel came from second last in the field of eight on the home turn to win running away by 3-1/2 lengths.

Think Winning ($4.80 fav) jumped well but drifted back as the front runners jockeyed for positions.

Jockey Luke Currie eased him to the outside in the home straight and the gelding let down strongly quickly racing to the lead and scoring easily.

Tim Hanley, stable spokesman for the McEvoys, said he had been confident of a bold showing.

“He has definitely got a few quirks this bloke,” Hanley said.

“But he’s got his fair share of ability to go with it.

“It was very pleasing to see him win tonight, he really deserved it.

“His couple of runs this time back, he was a bit unlucky first up, then hit a wet track second up.

“Luke (Currie) gave him a peach (of a ride) tonight and he was too good.

“He didn’t really handle the wet track at Colac last start so to finish as close as he did was very pleasing.

“The key for Tony and Calvin to get him out to 1400 metres tonight was a key and that is why we were so confident.

“I would like to thank the owners for their patience, and it was good a few of them from Clanbrooke Racing and Chris Dickinson were here tonight.”

Winning jockey Luke Currie paid tribute to the McEvoys and their staff for the victory.

“He’s s funny horse but we found the best of him today,” Currie said.

“He’s got good ability, but he does a big wrong.

“He’s not overbig but he’s strengthened through his preps.

“He’s matured a little bit – he was really hard work to start with.

“Credit to Tony, Calvin and the stable to keep him coming to the races and get him to the barriers.

“He’s slowly working it out and the ability is there.

“Think Winning was a bit awkward in the run going up in trip.

“There was good speed early and I wanted to keep him off and be in a nice spot.

“It didn’t help when they slowed a little bit, but he came out and quickened quite well.

“It was the first time he has been in front a fair way out and he wanted to stargaze a bit so there is improvement to come.”