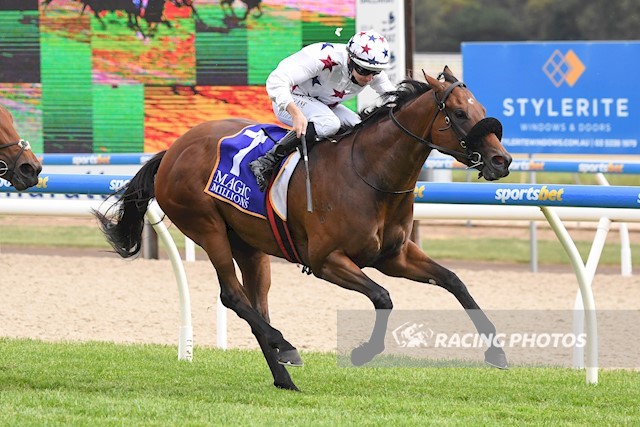 Sisstar stepped out of the giant shadow of her sister Sunlight to score a brilliant win at Ballarat on Cup day, Saturday, November 21.

Already a Group 3 winner, the Tony & Calvin McEvoy-trained Sisstar showed she is also incredibly talented with an all-the-way in the $150,000 Magic Millions 3&4YO Classic (1100m).

It took her record to four wins ands two placings earning $356,500 in stakes.

Ridden by Damien Lane, Sisstar began quickly to lead and gave a big kick on straightening and her rivals couldn’t catch her.

A $7 chance, the filly had a half-length to spare in beating The Astrologist ($2.10 fav) with Hawker Hurricane ($6), a neck away third.

“She really has big shoes to fill,” McEvoy said.

“Unfortunately, she didn’t grow into the size of Sunlight, she’s quite a petite, little mare.

“She has a lot of guts but an awkward racing style which can bring her undone sometimes.

“Today, she relaxed beautifully out there for Damien and she was in for the fight which was fantastic.

“I actually thought she would lead a bit easier than she did because she has been over-racing.

“But she came back under him (Damien Lane) beautifully.

“It was great to see what horses can do when they relax mid-race.

“Well done to the owners, they have been extremely patient.

“It was tough to live in the shadow of Sunlight, but she has done a fantastic job and is already a Group 3 winner and worth a lot of money.

“As I’ve said plenty of times she is very difficult to train so she spends most of her time back in South Australia and travels over to race.

“So, the team does a great job so I’m sure Tony will probably be claiming this win.”