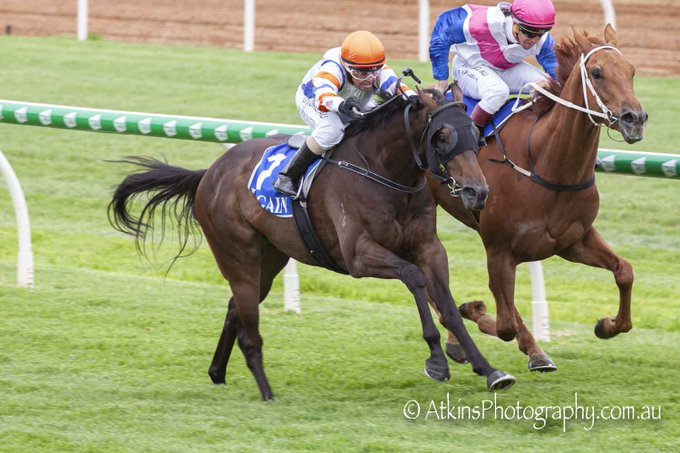 It was a case of Love ‘N’ Peace at Strathalbyn on Sunday, January 5 with a successful debut by the Tony & Calvin McEvoy-trained three-year-old.

“He was the calmest horse in the yard pre-race,” Cornell said.

“He jumped well and Barend was able to give him a lovely run just off the speed.

“When he was asked to improve, Love ‘N’ Peace answered and quickly moved up to challenge.

“Then when the other horse refused to give in, our horse was in for the fight and had a real will to win.”

Cornell said Barend Vorster said the gelding had been a “bit lost” when he hit the lead.

“Barend said Love ‘N’ Peace had wanted to look around when he took the lead.

“It was an excellent debut effort and he looks to have a nice career ahead.

“We’ll see how he comes through today’s race but I’m sure Tony and Calvin will be able to find a nice race for him.”

Cornell said Love ‘N’ Peace was a half-brother to the talented, but injury plagued, Friedensberg which the McEvoys also train.

By Love Conquers All, the gelding cost $60,000 at the 2018 Inglis Classic Yearling Sale, and was purchased by McEvoy Mitchell Racing in partnership with “Boo” Harvey who worked for a few years with Sam Hayes at the old Lindsay Park complex at Angaston but who is now back with her family at Hay in New South Wales.

“Love ‘N’ Peace has always shown some talent, but the stars just haven’t aligned for him to race until today,” Cornell said.

“He has been shin sore a couple of times but we have just been patient and today was a good reward.”