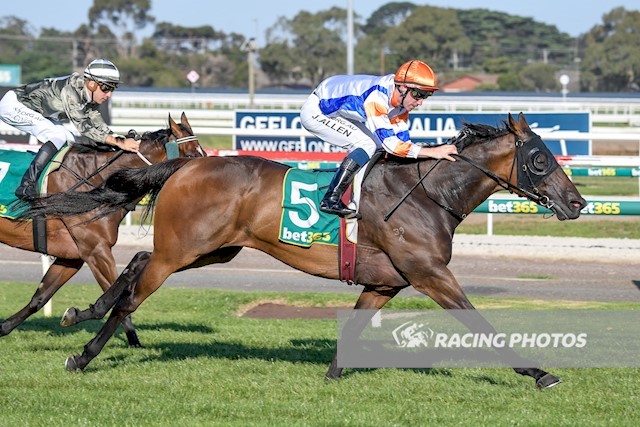 Last to first by Renegade

A last to first win at Geelong completed a perfect day for trainers Tony & Calvin McEvoy on Wednesday, January 29.

The training pair had one runner at Gawler in South Australia, Assuming which won well, and Renegade was the stable’s only starter at Geelong.

Jockey John Allen rode a patient race on the five-year-old in The Breeze Retirement Benchmark 64 Handicap (1509m) and it returned the ultimate result.

Allen stayed inside coming off the back straight while rival runners went forward out wide and as a result he was shuffled back to the tail of the field.

Once in the straight, Renegade came between runners and accelerated quickly over the final 200 metres to win running away.

McEvoy stable spokesman Tim Hanley said the addition of visors had been a key.

“We’ve had a bit of success with the visor gear changes lately,” Hanley said.

“It was a massive drop back in class today and we expected him to come out and win.

“John didn’t panic (when he was well back), Tony’s instructions were to ride the horse where he was comfortable.

“He got back but got the breaks when he needed them.”

John Allen said it had been a lucky pick-up ride after Regan Bayliss was unavailable.

“I had a look at a few of his (Renegade) replays he was a little bit keen,” Allen said.

“Today I had the opportunity to ride him quietly and he relaxed good.

“We just needed a gap to open in the home straight and to his credit he quickened well when he got there.

“Once I gave him a squeeze and asked him to improve, he really lengthened and picked up the leader. It was a good win.”