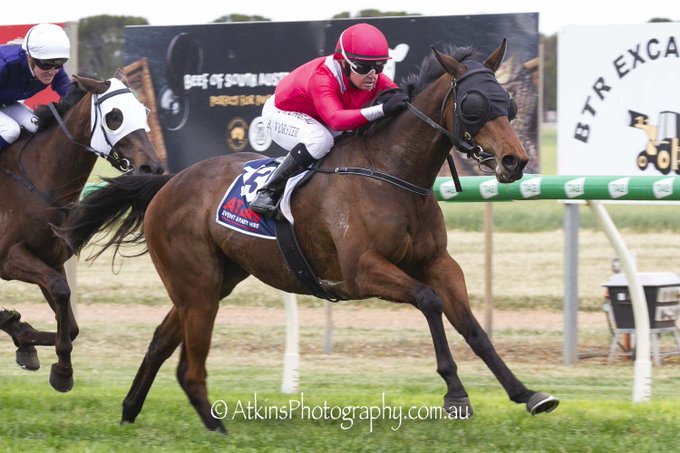 The McEvoys added blinkers and pacifiers to the filly for her run in the Atlas Event & Party Hire Maiden (1600m).

“She jumps shadows this filly.

“This track, coming out of the winter, has a lot of patches on it with the dry grass, so we decided to put the pacifiers on as well.”

The three-year-old daughter of Dundeel settled at the tail of the field before Vorster pulled her out wide in the home straight.

He eventually worked Victoria Quay to the outside and she let down strongly to win impressively.

The victory brought up a Balaklava Cup day double for the trainers and jockey who had won the previous race with Vancity Gem.

“She has got a bright future.

“Still learning her craft, she is still making a few mistakes, and not getting out of the gates quickly.

“You could see when she unleashed in the home straight what sort of talent she’s got.

“She proved today that the track is even, and you can come from wherever.”

Winning jockey Barend Vorster was impressed by the victory.

“Early on in her career she did work with the gear on her head,” Vorster said.

“The first time at the races we didn’t want to bother her too much with equipment.

“She came through that race quite strong, and her pre-race work was very strong.

“So, with the gear going on to get her to concentrate, she performed well today.

“I was a little bit concerned I was going to have to get too far back, but she travelled up beautifully for me.

“Our plan was to haver her where she was comfortable.

“I was happy turning for home that there weren’t any tear away front runners and I was able to take my time.

“She was still a little bit green going past them, and once she got to the front wanted to lug in, but it was a very good win.”