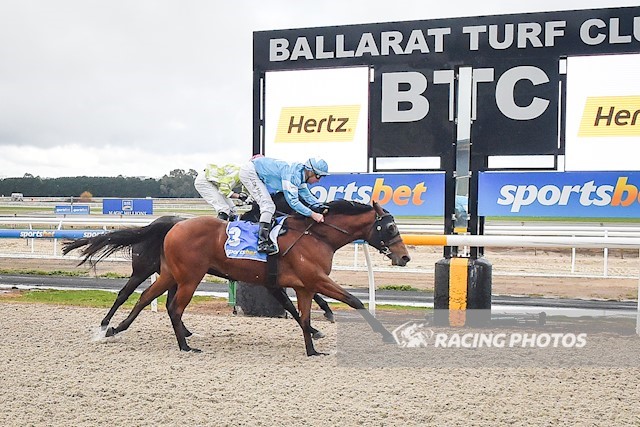 He’s been more of a lover, but Fighter finally found his mojo on the Ballarat Synthetic on Friday, June 25 to record his first win.

Going into the Hertz Ballarat Maiden (1500m), the Tony & Calvin McEvoy-trained Fighter had had six starts for five seconds and a third.

And many of those seconds were by photo-finish margins giving an indication he was loving just running alongside other runners.

For the Ballarat run, Jack Hill claimed he had the secret and pleaded with Calvin McEvoy for the ride.

“Jack rode him in a jump out at St Arnaud but when he went on to race here earlier in the month, Dean Holland had the ride,” McEvoy said.

“After the race when he got beaten in as photo, Jack came up and said he knew how to get Fighter to win so I gave him the chance, and put the pressure on him.”

Fighter, a red hot $1.50 favourite, came from a little worse than midfield to grab a neck win from Ideal Miss ($21) with Dreambound ($31) three lengths away third.

Hill had the four-year-old one wide midfield among the 12 runners but didn’t panic when others came from behind him to try and improve.

He waited until the field straightened before finding clear running and the favourite took out after the leaders.

Fighter responded to Hill’s urgings to take a narrow lead and held a margin to the line.

“It was good to finally get the win with him,” McEvoy said.

“I have to give a shout out to Dean Holland as well.

“Dean suggested he would be better if ridden more quietly and that worked out well today.

“We won’t get too carried away just yet and take him through his classes, but I do believe he is capable of running well in much better races.

“Hopefully today gives him the confidence to go on.”

Winning jockey Jack Hill said he had been confident of having the key to a win with Fighter.

“When I rode him in the jump out at St Arnaud I felt I learnt a lot about him,” Hill said.

“I was careful not to pull the stick on him in the home straight.

“I believe he responds well to hands and heels, and I felt he always had the runner up covered over the final stages.

“Pre-race I was quite confident but I saw Calvin was starting to stress. It is all good now.”