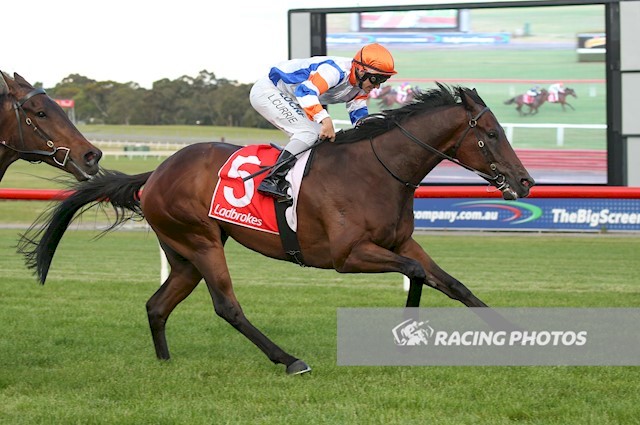 “Happy wife, happy life,” is a saying everyone has heard, and trainer Tony McEvoy is always trying to put into practice.

The win of promising middle-distance galloper Friedensberg at Sandown on Wednesday, December 12 ensured things stayed positive in the McEvoy household.

Tony’s wife Jo has a special interest in the big son of High Chaparral – she named him.

When there was a struggle to name the now-four-year-old, Jo noted he was out of the mare Hill Of Peace and knowing all the towns and villages around the Barossa Valley, picked up that the hamlet of Friedensberg, near Springton, was German for a hill of peace, and so he was named.

Ridden by McEvoy Mitchell stable jockey Luke Currie, Friedensberg bowled along some four lengths in front of the field and answered the jockey’s riding when a late challenge came from the runner-up.

“There didn’t look to be any speed, so Tony said to let him roll along and get into a rhythm where he was happy,” Currie said.

“He was happy, but I was glad when the field started to come up to challenge.

“It was nice out in front but was quiet and when he heard the other runners, he knew he had to pick up the tempo.

“I knew he would quicken, and he did and won well.

“He has been a little slow to mature but is getting better with each run.”

Matt Tillett, Racing Manager for McEvoy Mitchell, said the stable had always had a good opinion of the gelding.

“Tony has always liked him and now he is starting to mature,” Tillett said.

“It was an intelligent ride by Luke and the horse won impressively.

“Credit to the owners who have been very patient and now are starting to reap the rewards.”

Friedensberg’s win took his record to three victories and a second from just six starts and he is certain to build on those figures.