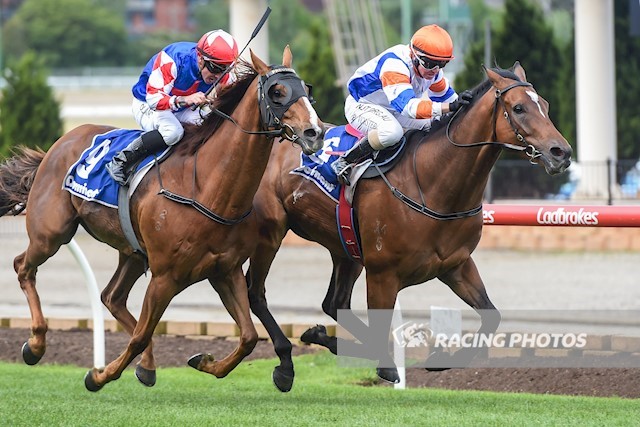 Despite covering ground throughout and being strongly challenged turning for home, Secret Blaze, ridden by Barend Vorster outstayed the opposition to win impressively.

Coming from a wide gate, Vorster found himself caught three wide early but allowed the four-year-old to get into a rhythm before improving coming to the home turn.

The runner up loomed up on the home turn and with momentum looked likely to sweep clear but Secret Blaze was ready and found again to draw clear and claim victory.

Trainer Calvin McEvoy said the winner was a definite improver.

“He’s really put the writing on the wall this preparation,” McEvoy said.

“His first up run over a shorter trip was very good.

“He had a seven-week break then at a mile in AdelaIde he was very strong.

“He came to Melbourne two days after than run and Mick and team here have done a wonderful job with him and there wouldn’t be a better looking horse in the stable.

“He really had to earn it today but obviously barriers can do that.

“Barend took his medicine, had confidence in the horse and kept him in a rhythm.

“He rode him really well in the circumstances.

“A very good performance by the horse and a great group of connections here today.”

McEvoy said he would consider backing Secret Blaze up in next week’s Pakenham Cup.

“From an awkward barrier is was always going to be tough.

“I didn’t want to be in a hurry, he’s a nice strong horse.

“Through the 700 metres the pace really slackened up and a few of the boys noticed that so we had to get going and get some momentum.

“I reckon you can only do that when you have rock solid fit horses likes Tonys’.

“Credit to the stable they presented him really well.

“He was really strong late.”