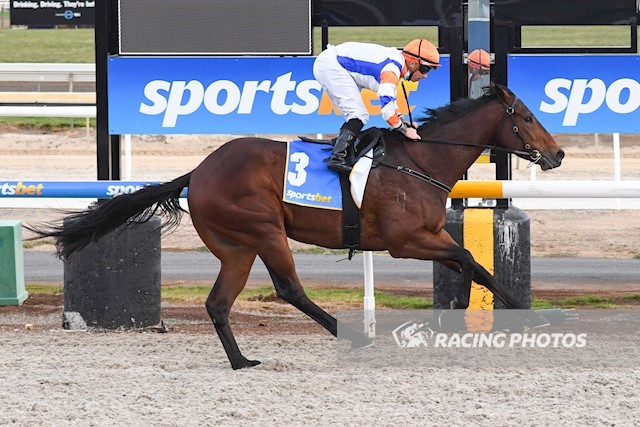 Late starting My Boy Birmingham made a successful debut on the Ballarat Synthetic track on Monday, June 7.

First up at 1500 metres, My Boy Birmingham, bred by Wayne Mitchell, gave a bold front-running performance to win the Polytrack Maiden by three lengths.

The Tony & Calvin McEvoy-trained gelding, sent out at $3.10, and ridden by Dean Holland, beat Magic Achiever ($31) with Steel The Moment ($16) a head away third.

Trainer Tony McEvoy said he had been very impressed.

“He went hard basically for the whole race,” McEvoy said.

“He jumped well and shared the lead early but wanted to race the horse on his inside.

“Dean tried to ease and get him to settle but he was having none of it.

“He beat the other horse off on the home turn and even though he went several lengths clear I felt he had to stop over the final 200 metres.

“But he kept battling away and never looked like being caught.”

McEvoy said My Boy Birmingham had throat issues for much of the time he was in training.

“He has had pharyngitis and very immature airways.

“Each time we would get him going he would end up with mucous in his throat.

“Structurally he was good, it was just the throat issues which have delayed his career.

“He is still learning about racing, but today’s effort was excellent.

“I think when he gets it right, he’ll have no trouble running a strong 2000 metres.”