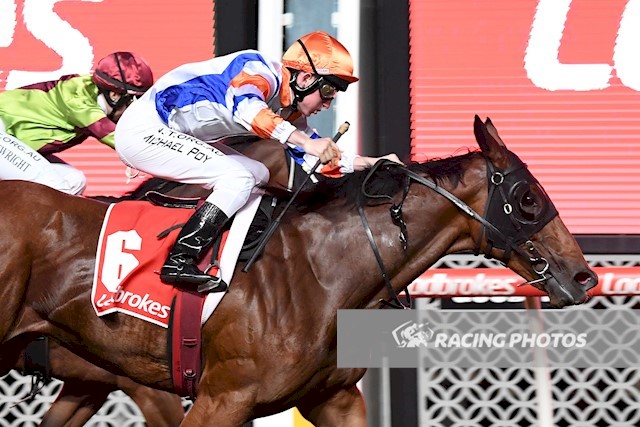 Beauty began well for jockey Michael Poy to sit second early before reigning in the leader to grab victory in the shadows of the post.

It was the mare’s fourth win from just 12 starts and took her stakes to $174,900 for the ownership group which includes a lot of the trainers’ family and friends in the Streaky Bay Racing syndicate.

“She is unbeaten here at Moonee Valley, she really likes it here,” McEvoy said.

“It was a really good win.

“Her form has been a bit patchy, a bit up and down.

“Two starts ago she was very good at Caulfield, then flopped last start.

“Dad had a good suggestion that we try the visor, and it worked.

“It was a beautiful ride Michael and it was great to see her back in form and she loves the Valley track and distance.

“We always thought she would get a bit further but her two best wins have been the 1200 metres here.

“She is already a Listed winner and has been a bit hard to place but now she is back in form we will find a nice little race for her.”

Winning jockey Michael Poy paid credit to the training team of Tony & Calvin McEvoy along with the staff at McEvoy Mitchell Racing.

“Credit to the team who brought her along rock hard fit,” Poy said.

“Visors on for the first time have really sharpened her up.

“Coming around the turn I wasn’t able to make ground on the leader.

“I thought I won’t go for the stick but really keep the horse balanced and wait until I straightened.

“Once I straightened, I wasn’t picking it (the leader) up as quick as I thought.

“Halfway down the straight she got through her gears, I kept her balanced and went for the whip late and she found that extra gear and ran over the leader.”

Poy said he thought there would be plenty of speed in the race and there had been.

“I wanted to sit off the speed from the nice cushy gate, but with the visors on she was a little bit keener than I expected.

“She jumped and towed me there.

“Full credit to Tony McEvoy and Calvin, they brought this horse here in fantastic order.

“They have got Darren (Mcleod) there working hard and lots of staff there.

“I go down there once a week sometimes, and just play my little role in it, and they do a fantastic job here in Melbourne.”