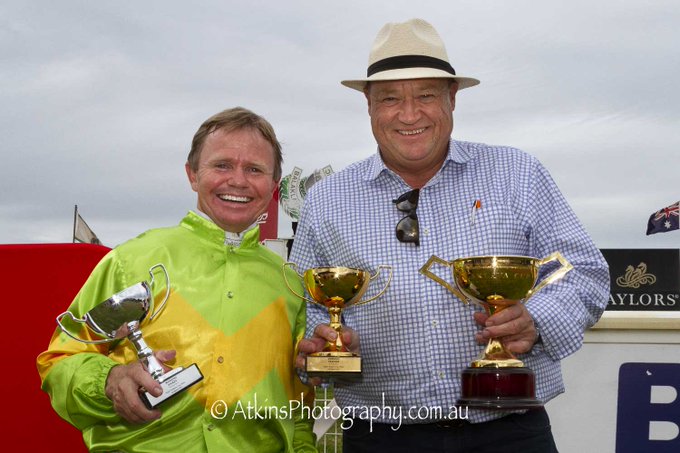 The training partnership of father-and-son, Tony & Calvin McEvoy, made it two from two when Winning Partner stormed to victory in the Listed 2020 TQCSI Balaklava Cup (1600m) on Wednesday, September 16.

This year, the team had five runners in the $100,000 feature but it was the heavily backed favourite, ridden by stable jockey Barend Vorster which emerged from the ruck to race away and win well.

The win gave Tony McEvoy his third win in the race having scored with Longshoreman in 2014, and the stable three winners on the day having won earlier with Vancity Gem and Victoria Quay.

It was the first Balaklava Cup win for Vorster who was delighted to have wife Nikki, and son Brendan on course to celebrate the win with him.

He was selected by the stable at the 2017 Magic Millions Adelaide Sale for just $110,000 and now has won five races and $273,.325 for owners, the Hong Kong-based Glenvallen Investments of Mr. Li, and the Seymour Bloodstock of Darren Thomas.

Today, Winning Partner didn’t begin quickly and settled towards the tail of the field before Vorster allowed him to be midfield turning for home in the field of 16.

Once in the straight, Vorster angled the gelding to the middle of the track and he stormed home to win strongly.

Trainer Tony McEvoy said Winning Partner had been very consistent and was entitled to win a good race.

“He’s been in such great form,” McEvoy said.

“He deserved a race like this and has been promising it for a long time.

“Darren Thomas, and Mr. Li in Hong Kong, the owners, they have been really supportive of the stable.

“They have been patient with this horse, and you could see today what he can do.

“He was a bit further back than we expected but unleashed very quickly.

“The key is to have him on top of the ground, he doesn’t like getting his toe in.

“He’s a promising horse with more to come and the Murray Bridge Cup is on our agenda.”

Winning jockey Barend Vorster was delighted to have his family on course for the Cup win.

“Brendan was on the fence and it was great to have the family here today,” Vorster said.

“It’s been a bit rough for us with Covid-19, but Tony has looked after us and wins like this make it all worthwhile.

“Winning Partner has always run good races for me and today was my third win on him.

“Credit to the stable. He was across in Victoria, and he never handled the heavy going at his last run, and the team over there sent him across in great order.

“Tony let him have a week up on the farm at Murbko to freshen him up.

“Early on, they had me beaten for speed, but I wasn’t worried because I knew he would give me a strong finish.

“They kept the gallop up all the way around the corner, and I knew they had to come back to me.

“Credit to Winning Partner, it was a good, strong win and well done to the owners.