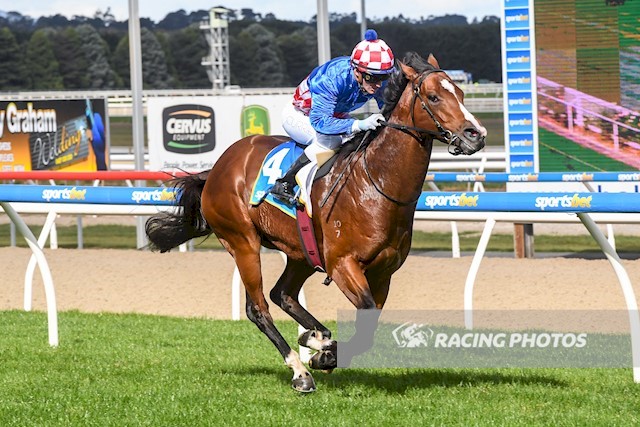 The Waterman sprays his rivals

Classically bred three-year-old The Waterman made a successful debut at Ballarat on Sunday, May 8.

A half-brother to the group one winner and now proven stallion Starspangledbanner, The Waterman is trained by Tony & Calvin McEvoy.

Starting at $7.50, the son of Not A Single Doubt, sat wide early before working to the lead in the home straight to win the Pipe Pro Direct Drilling Maiden (110-0m).

The colt has been given a long time to mature by the McEvoys in consultation with the ownership group Makybe Racing and Breeding Syndicate managed by Tony Santic.

He won two trials in South Australia in November but didn’t go to the races and was given a break before debuting today.

Trainer Calvin McEvoy was delighted with the first up win of The Waterman.

“Congratulations to Tony Santic and his team, they have been so patient with him.

“He was nearly ready to go as a two-year-old but went a bit shinny.

“We brought him back, and full credit to Tony, I was keen to avoid a soft track and a wide barrier, but he said he’s overcome bigger things in life than a wide barrier.

“Full credit to you Tony and so pleased to have him win on debut.

“He’s got a big pedigree, still a colt and still learning.”

McEvoy said they were a little unsure how The Waterman would perform on debut.

“His work has been good, but we took him to Camperdown, and it was a very soft track there and the jockey, Dean Yendall, said he didn’t travel too comfortably in it.

“I was a touch nervous, but it is not too bad here, the ground, and just very pleased to get a good result.

“We will just take him through his grades and hopefully start a little picket fence, I really do think he will improve out of what he did today.

“Not only fitness-wise but maturity and smarts.”

Winning jockey Luke Currie was impressed by The Waterman’s debut.

“He gave me a nice feel,” Currie said.

“He’s been through the McEvoy system from Angaston to here at Ballarat.

“He’s had a couple of jump outs and trials and was ready to go today.

“I was a bit unsure what he would do when I pressed the button. but he was impressive.”

Currie said he believed The Waterman was capable of winning a better race on what he had done at Ballarat.

“Obviously today he was well educated and got it all right.

“It was only his first go so there is a bit of improvement in him.

“I really did like the way he kicked away.”