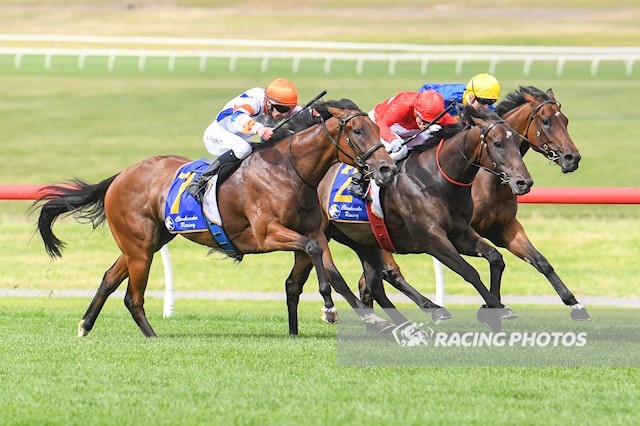 After having a perfect run, Goolagong Rose, trained by Tony & Calvin McEvoy, finished strongly over the final 50 metres to grab a head win in the Clanbrooke Racing Handicap (1300m).

A $9 chance, the four-year-old mare, ridden by Damien Thornton, ran down Fiery Red ($7) with Duke of Neworleans ($1.80 fav) three-quarters of a length away third.

Thornton had the winner ideally placed early, running fourth and produced her in the home straight to ask her to sprint for victory.

The first two runners looked likely to hold Goolagong Rose with 100 metres to travel but Thornton rode hard and the mare arrived just in time.

Trainer Calvin McEvoy said it had been a satisfying win by Goolagong Rose which made it two victories from just four starts.

“The owners have been extremely patient, and we thank them.

“She’s always shown us a good amount of ability.

“Early on in her career she didn’t have the soundness to get there and she had a little bit of surgery quite a while back.

“We’re still learning about her.

“We ran her first up over 955 metres this prep and last start at Sale, Damien (Thornton) got off and thought she found the 1100 (metres) too sharp.

“It was a beautiful ride today, and very pleasing.”

McEvoy said he hoped Goolagong Rose could continue to improve.

“She’s a Wednesday winner now, so we’ll find another suitable race and take her through her grades.

“We won’t throw her too far in the deep end, rather let her tell us where she wants to go at this stage.”

Winning jockey Damien Thornton said he had mixed opinions as the field entered the home straight.

“I didn’t think I was going to get there for a bit,” Thornton said.

“At the top of the straight I thought I had them, then at the furlong (200m) no hope.

“Anyway, she did a really good job and fought it out really well.

“It was nice to get the better of the minor placegetters today.

“It is always nice to ride a winner in these (McEvoy) colours.

“I’ve had plenty of success for them, even over in Adelaide when I was stable rider for about 12 months.

“Since I’ve come back, they’ve always put me on a little bit here and there.

“Cal asked me to come and do and bit of work over the last few weeks, and they’ve given me a few rides, so I’ll keep turning up.”

After winning her maiden on debut at Gawler in November 2019, Goolagong Rose’s future looked bright.

But a series of setbacks saw her away from the racetrack for 13 months but her three runs this preparation have been good and the future again looks bright.