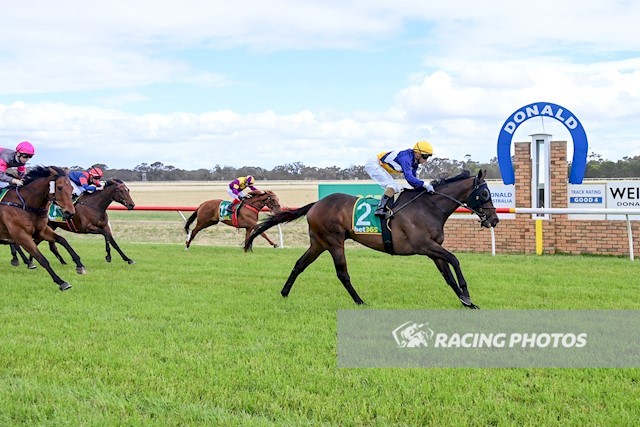 At his third run from a spell, the Tony & Calvin McEvoy-trained six-year-old came from last to win the Pepper Hill Lodge Benchmark 64 Handicap (2000m).

From his wide gate, Currie allowed Resurge to settle at the back of the field.

Several other runners went early to improve their positions and the gelding got a wonderful trail into the race.

Currie had Resurge ready to sprint turning for home, and despite the blustery conditions, the gelding dashed clear and won comfortably.

“This horse has had back surgery and not many come back to racing and win,” McEvoy said.

“His first two runs from a spell have been okay and we were looking for a race at 2000 metres and today was perfect.

“You wanted to be on him a long way out.

“Luke had him travelling beautifully and he came into the race superbly.

“He sprinted quickly and put them away.

“It is a shame he hasn’t been able to show all the talent he has. Unfortunately, his issues have stopped him reaching a higher level.

“We will look for another suitable race around the trip to try and keep him in winning form.”

Winning jockey Luke Currie said he had been confident of victory in the run.

“We got a nice cart through,” Currie said.

“We got there quite easily, but it is so windy in the straight it is blowing them around a lot.

“It is hard for them all in the home straight and he got blown around a little bit, so it was a good effort.

“The wind is across and into your face in the straight, they really don’t like it when they are racing into that headwind.

“It is quite strong, and they get very unbalanced and all over the place.

“It was out to his right trip today.

“When he gets the right run, he’s a horse with the confidence he can look good winning and that is what he did today.

“He was really able to travel up under his own steam and he was good winning.”