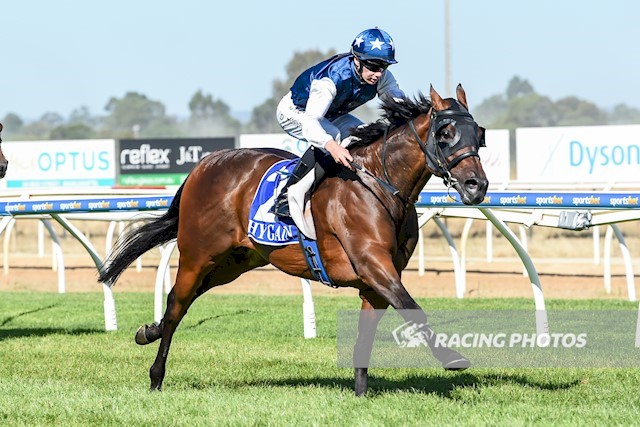 Outlandos, a horse that has shown more on the training track than the racetrack, might have finally turned the corner following an easy win at Wangaratta on Sunday, January 17.

Trained by Tony & Calvin McEvoy, Outlandos has been given the opportunity to take on black type races but has not fulfilled the hopes of connections.

“He has shown us a lot from his two-year-old days,” said trainer Calvin McEvoy.

“At home he was exciting us but when we took him to the races he didn’t run up to his work.

“Mentally, he just wasn’t there, he is a thinker.

“He has been jumping slowly and getting too far back so today we put a barrier blanket on, and it worked well.

“Today, it was an easy watch and a beautiful ride by Damien Thornton.”

Sent out the $2.25 favourite, Outlandos settled one-out, one-back in the A1 Tyrepower Wangaratta Benchmark 64 Handicap (2000m) and travelled beautifully.

Thornton asked him to improve with 600 metres to travel and the four-year-old moved clear to score a comfortable two length win from Single Crown ($8.50) with Queen Guinevere ($7.50), three-quarters of a length away third.

McEvoy said the owners had been very patient and hopefully would now be rewarded.

“Today’s win would be confidence boosting for him, but we won’t rush him back to the top level just yet.

“We’ll keep looking for races around today’s trip and let him show us when he is ready for tougher challenges.”

Winning jockey Damien Thornton had been confident of victory a long way from home.

“He jumped today and that was the big difference,” Thornton said.

“Cal put the barrier blanket on, and it obviously worked.

“They rolled a bit from the half mile (800m), he had a lovely cart into the race and he only had to do his job the last 350 metres or so.

“He did it well and it wouldn’t surprise me if he ran a bit further than he did today – I think he is a genuine stayer.

“He’ll be better chasing than left in front too far out.”

“Some days he wouldn’t be out of place in a circus.

“It was really good to see him do it properly today.”