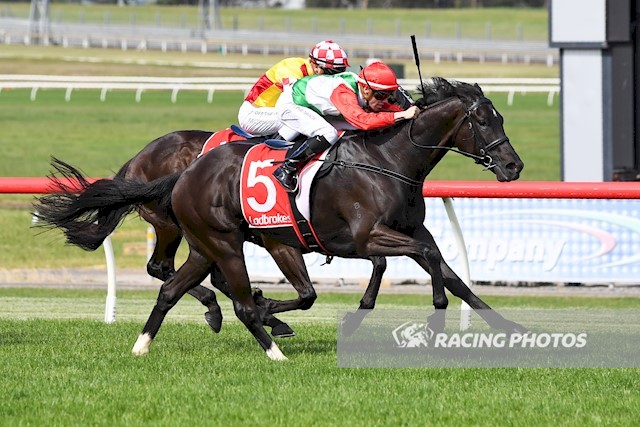 No Eluding the winner’s stall

Five-year-old Eluding continued to impress as he scored a strong win at Sandown Lakeside on Wednesday, November 24.

Notching his fourth win from just nine starts, Eluding made it two wins in a row taking out the Ladbrokes Card Benchmark 70 Handicap (1400m).

For trainers Tony & Calvin McEvoy it brought up a two-state treble as they had two winners from as many runners at Balaklava.

Eluding ($6) settled one-out, one-back for jockey Will Price before winding up in the home straight to score by three-quarters of a length from Tanker ($4.40 fav) with Vucetich ($4.80), 1-1/4 lengths away third.

Trainer Calvin McEvoy said Eluding was a horse on the way through his grades.

“It was so nice to have owners back on course to see the win,” McEvoy said.

“He is going really well – thanks to Louis Mihalyka and his team for their patience.

“He (Eluding) has had a few problems with his feet, the guys have had to be extremely patient, and he is repaying them now.

“He ended up exactly where we wanted to be in the run but had left it up to Will.

“He had to ask him a little bit early but then when he came back to him it worked out perfectly.

“I think he has matured now, a lovely big son of Toronado, he’s got a lovely temperament and easy to deal with.

“We had put him down as a wet tracker because he won his maiden on a heavy 10, nut now he’s won two on Good 3s, he sound and enjoying it.”

McEvoy said the stable would continue to take him through the grades.

“We’ll give him a couple of weeks and find another race.”

Winning jockey Will Price is continued to be impressed by Eluding.

“At Warrnambool the other day we got caught wide but were always travelling nicely and I was happy to have him where he was.

“Today, we were always planning to be forward, and it worked out we got the one-one.

“I could see the favourite (Tanker) in front of me and had a nice one to follow.

“I was happy with the spot we got, and he won quite nicely.”

“The leader quickened up quite nice off the back, kicked off the corner really well.

“We went off the bridle a touch but every time I asked for an effort, he found for me and kept having a crack.

“He was good through the line.”

Price said Eluding was capable of stepping up to 1600 metres for his next run.