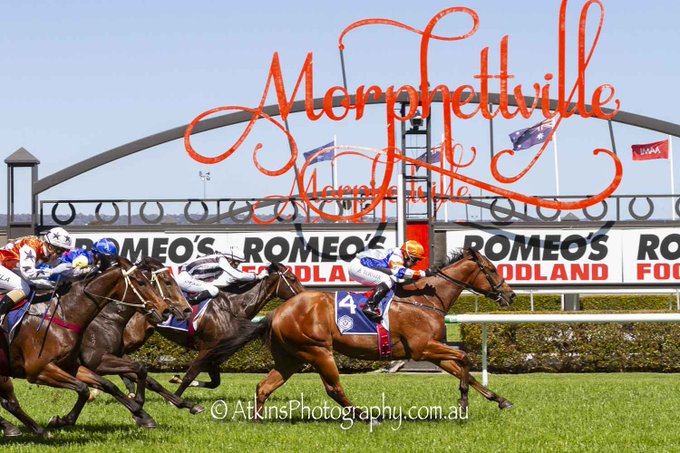 It has taken a while to get him to the races, but three-year-old Deep Speed showed the wait was worthwhile at Morphettville on Saturday, October 10.

Despite coming from the wide gate of 12 in the field of 14, Deep Speed, trained by Tony & Calvin McEvoy, covered ground sharing the lead before scoring a length win in the TAB Maiden (1200m).

A well backed $2.50 favourite, the three-year-old son of champion sire Deep Field, ridden by Barend Vorster, held off all the challengers to beat Vancouver Velvet ($4.40) with Sparkup ($18), a quarter of a length away third.

Deep Speed jumped quickly and Vorster had him sharing the lead coming to the home turn, before taking the lead on straightening.

The gelding kept running and despite others trying to challenge, he proved too good.

Deep Speed was due to make his racetrack debut at Flemington in October last year but was scratched at the gates and found to be lame.

Trainer Tony McEvoy had expected a bold showing at Morphettville.

“He was an odds-on favourite for the Maribyrnong Plate at Flemington a year ago and had to be scratched at the barrier.

“He shied on the way to the gate and struck himself in front cracking a splint bone.

“They take a lot of time to heal, and because I think so much of him, I gave him even more than the vet suggested.

“Horses don’t normally do what he did today – he was absolutely fantastic.”

McEvoy said he would give Deep Speed another race in Adelaide over 1250 metres later in the month.

“We’ll then look to give him a run over 1400 metres at Flemington during Cup week.”

Among the ownership group is the Streaky Bay Racing Syndicate managed by Clint McEvoy.

“Clint is the son of my eldest brother Peter and they are involved in the racing club.

“They were looking to be involved in a horse and took a part of this bloke. They have had to be patient but hopefully will be rewarded.”