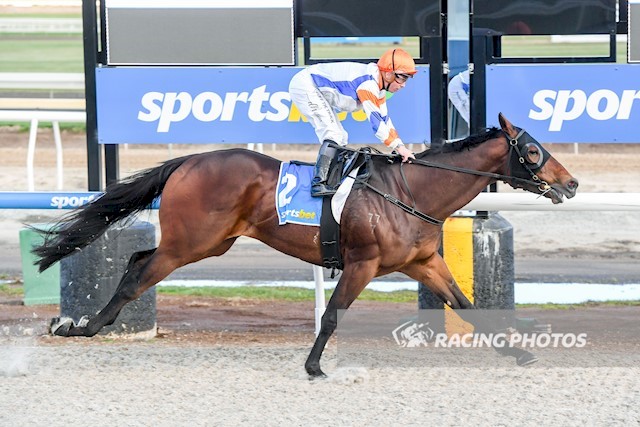 A return to the Ballarat Synthetic track saw the Tony & Calvin McEvoy-trained My Boy Birmingham back in the winner’s list and running a track record.

Despite a little early pressure, My Boy Birmingham, heavily backed from $2.15 into $1.90 favourite, led throughout to score an easy four length win in the Polytrack Benchmark 70 Handicap (1400m) clocking 1:23.60.

Four of the four-year-old’s five wins have been on the Ballarat Synthetic surface.

Jockey Dean Holland allowed the gelding to find the front comfortably but there was early pressure from another runner.

Past the 650-metre mark, Holland allowed My Boy Birmingham to lengthen stride and he quickly shook off his opponent.

My Boy Birmingham kept rolling up the home straight to win easily from Crystal Chief ($16) with El Santo ($21) a further 6-1/4 lengths away third.

Trainer Calvin McEvoy was delighted to see the ease of the win and a new record.

“It really brought a smile to my face,” McEvoy said.

“He’s a really nice horse, an owner’s dream, he comes to the races and shows up most times.

“He bounced back today, it was terrific.

“With his win today, we might have a throw at the stumps at the Mildura Cup.

“He’s a tough on-pacer and I don’t think he is just effective on synthetic, but he does love it.

“We’ll talk to the ownership group, Scott Bulger and the boys, but I wouldn’t mind having a go at the Mildura Cup.

“It would be a much better tempo, a good quality opposition and we have to see if he makes the field.

“He’s only got one gear, go and grind away but it does suit him.”

Winning jockey Dean Holland said he had a good association with My Boy Birmingham.

“He’s been good to me, last winter and now today” Holland said.

“Last start I probably made a bit of a blue and tried to ride him too pretty.

“He’s got good gate speed and can maintain it the whole way, I think it is the way to ride him.

“I was keen to hold the lead, then skipped away at the 650 metres.

“He was never going to get beat, he wasn’t slowing up on the line.

“He’s in good form and he’s not just a synthetic horse, he is also proven on the grass as well.

“He is back in form and going to have a good prep.”