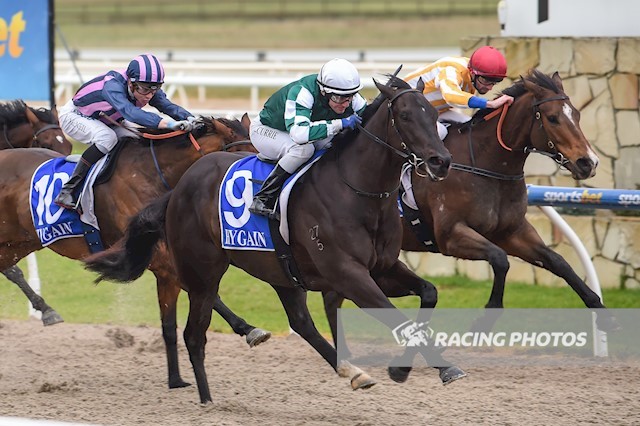 Yulong June indicated he is a three-year-old of talent in the stable of Tony McEvoy with a strong victory on the Pakenham Park synthetic track on Friday, May 31.

A $9 chance, the gelding sat second early before drawing clear to win the Trusteel Fabrications Benchmark 64 Handicap (1200m) by a long neck from Channing ($31) with I Am Vinnie ($6) a head away third.

Jockey Lure Currie had Yulong June away from gate seven and allowed him to go forward and sit second outside the lead and dictate the tempo of the race.

He asked the three-year-old to accelerate past the 300m mark and Yulong June held his rivals in the run to the finish.

It was two wins in a row following a good maiden win at Benalla on May 6.

“Stepping up from a maiden is hard to do,” McEvoy said, “and it looked a solid race.

“He got across from his awkward gate and Luke gave him a beautiful trip and he was strong.

“His temperament has got to get better and still leaves a bit to be desired, but we are working on it.

“In his work he looks like a Saturday-class galloper and he will get his chance, probably this preparation.”

“He’s still pretty green and a bit hard to handle but he won well,” Currie said.

“He wanted to get off the track and wandered around.

“He’s got to take a step back and learn to relax in his races.

“He’s doing this without getting it all right.

“Yulong June has the ability, mentally he is not quite there so he’s doing a good job to be winning these races.”