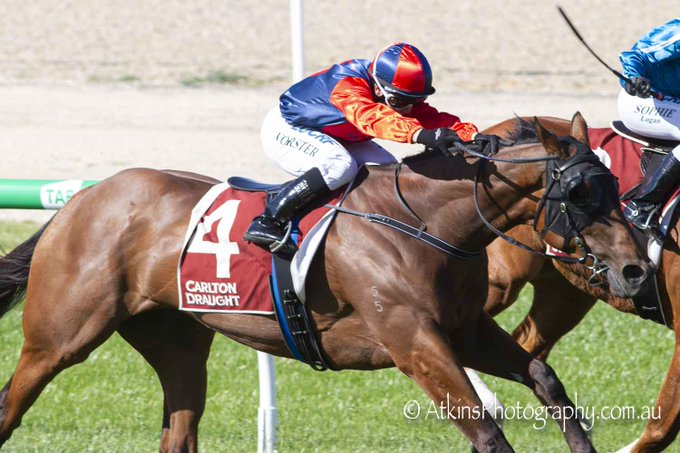 Vorster, who came to Australia to be stable rider for Tony & Calvin McEvoy, had been riding on a permit but announced after the win he had been granted a visa which means he can now ride for outside stables when not required by McEvoy Mitchell.

“I’d like to thank Tony and the team for helping to get the visa approved,” Vorster said.

“The reins will be loose now, and I’ll be looking for outside rides but again I need to thank Tony and the team for getting to me where we are now.

“It will be onwards and upwards from here.”

The victory brought up a Murray Bridge double for trainers Tony & Calvin McEvoy who had won earlier in the day with Raabeeha.

The four-year-old mare has now won three of her five starts.

After being wide and midfield early, Miss Brixton ($2.60 fav) charged late to score a head win from Desidero ($11) which had grabbed a five length break midway up the home straight. Cool Fonzy ($10) was 2-1/4 lengths away third.

Co-trainer Tony McEvoy said he thought there were more wins for the mare.

“She is definitely progressing,” McEvoy said.

“Three wide but with cover which for a big striding mare I wasn’t too fazed about.

“Gee the leader gave a kick and she had to really fight hard and they have been a bit hard to pick up here today.

“She did a great job and was very brave.

“She is progressing nicely and will probably get further.

“We won’t get ahead of ourselves and try to stay winning.”

Vorster said the mare had put up a good effort to win.

“She was a little sluggish out of the gates today,” Vorster said.

“I ended up in a position a little further back than I wanted to be.

“However, she did have good cover and the right horse to pull me along, and she finished very well.”

Vorster said it was important to have good cover along the back straight with a head wind.

“When the wind meets you head on coming to the corner, if you have a bit of cover and not doing much work, they have got something left.”