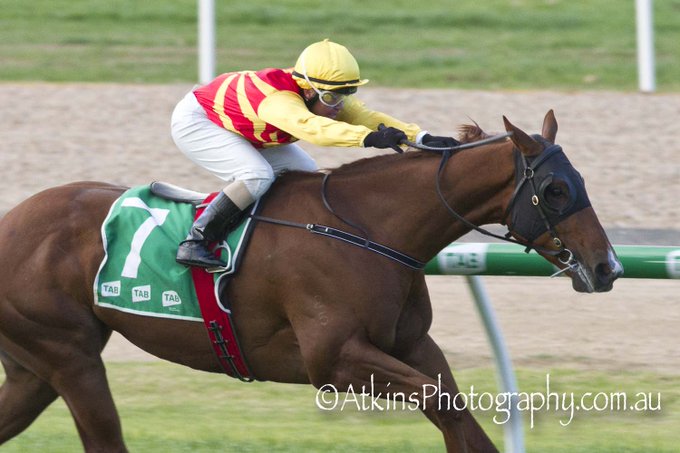 Vahash brought up a Murray Bridge training treble for Tony McEvoy with an all-the-way win in TAB Handicap (1400m).

After victories by Silent Sovereign and Magic Sunset earlier in the day, it gave McEvoy an amazing nine winners from just two meeting at the new circuit at Gifford Hill. It was four for the day for the stable with Vinland winning at Flemington.

A $3.10 favourite, ridden by Barend Vorster who made it a winning double having scored on Magic Sunset, Vahash scored by a half-length from Sir Johnson ($18) with Borris In Ossory ($6) a head away third.

In winning, the four-year-old gelding made it two wins from as many starts.

Assistant trainer Calvin McEvoy said it had been an excellent performance by the winner.

“It is tough to step up from a maiden to a benchmark 64 in city company,” McEvoy said.

“The plan was to be positive early and Barend got him across to the inside.

“Borris In Ossory put pressure on but Barend has a good clock in his head and held the inside and didn’t overstretch Vahash.

“He gave a good kick in the straight to win well.

“I’m not sure where we will head next but I’m sure Dad (Tony) will place him to advantage.

“It was good to win for part-owner Darren Thomas who has such a strong association with Murray Bridge as well as Sash Petrevski and his group of owners.

“They have been very patient and are now reaping the rewards.”

“He jumped beautifully and go into a good rhythm,” Vorster said.

“Even though the other horse was paying him plenty of attention, he still gave a big kick when I asked him to extend.

“He keeps stepping up and certainly has a very b right future.”