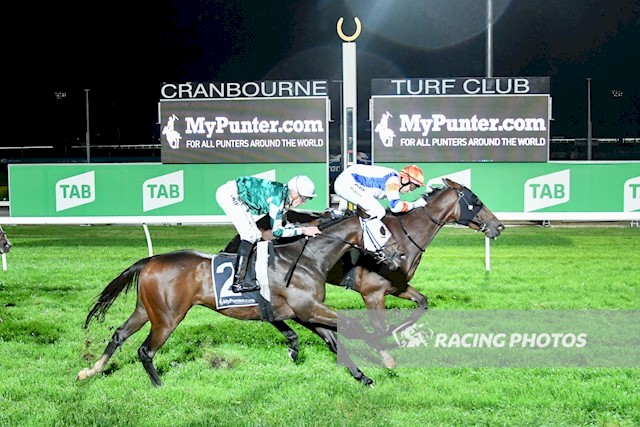 Consistent Sasko, trained by Tony McEvoy, turned in a tough performance to plough the heavy 10 track at Cranbourne on Friday night, May 10 and score a gallant win.

After leading by four to five lengths midrace, Sasko, ridden by Andrew Mallyon, was headed turning for home but came again to score a half-length win.

To add merit to the win, the race was only the second this preparation for Sasko after a five-month spell.

Tim Hanley, spokesman for the Tony McEvoy stable, said it had been a tough performance.

“Tony came up with a plan and rang me just before the race to get to the outside.

“He’s a big fellow and can break their hearts. He loves the heavy going.

“We always knew he would dig in up the home straight and Andrew erode him perfectly.

“Sasko has a great bunch of owners and they are always about the place, and we are very happy for them”

Winning rider Andrew Mallyon joked that Sasko took some pulling up after the win.

“He wanted to go on a lap of honour after the race,” Mallyon said, “it has been something he has done before.

“He was rock hard fit tonight and he is what you see you get.

“He bowls along at his own tempo and I don’t fight him too much because he is too big and strong.

“He got into a lovely rhythm and ploughed through the track.

“Even when the runner-up moved alongside, in these conditions he is a hard horse to get past.

“I had had a soft enough run early that I knew he would tough it out.”