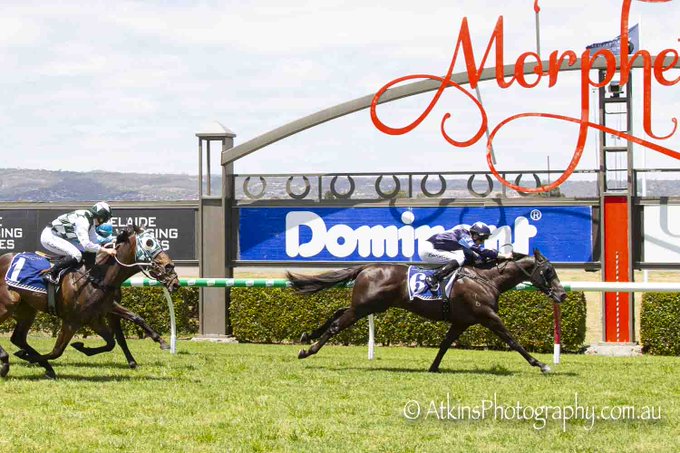 The Pugilist lands a knockout

The Pugilist knocked out his rivals with an impressive win at Morphettville Parks on Saturday, November 9.

A heavily backed $1.90 favourite, The Pugilist, ridden by Todd Pannell scored a 1-1/2 length win in the Channel 7 Three-Year-Old Maiden (1400m) beating Clearly Adonis ($11) with Flying Arion ($6) a half-length away third.

Pannell had the three-year-old, trained by Tony and Calvin McEvoy, away well and was happy to sit outside the leader where he was able to dictate the tempo.

He asked The Pugilist to sprint from the 300 metre mark and the gelding dashed away to win easily.

Trainer Calvin McEvoy said the gelding was a three-year-old on the improve.

“He trialled very good in preparation for today,” McEvoy said.

“We asked Barend to give him a nice hit out and he really asserted himself in that trial.

“He’s a horse we had taken to the races a couple of times very confident and he had let us down, but I think he was just a bit immature.

“As soon as they jumped today, and Todd put him in that position, it was an easy watch.”

Winning jockey Todd Pannell said it had been a good win.

“It worked out good,” Pannell said.

“He did everything pretty much spot on today.

“He just started to tow me before straightening and did everything right.”

“Tony and Calvin get the horses pretty fit at Angaston so there were no worries first up at 1400m.”