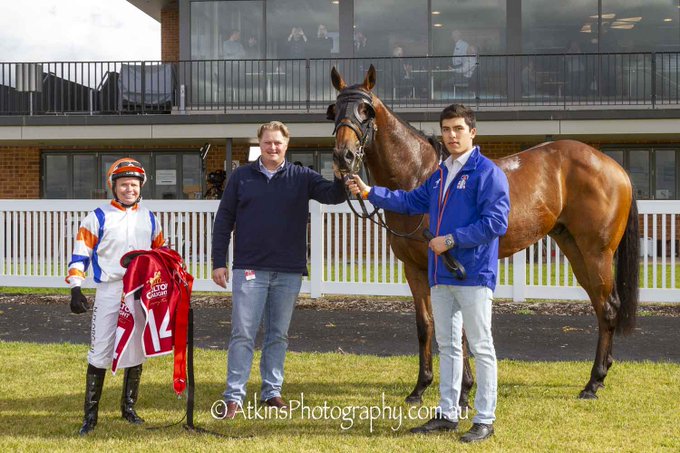 Lightly-raced The Brumby gave his rivals age and a belting at Murray Bridge on Wednesday, June 24.

Only a two-year-old, The Brumby, ridden by Barend Vorster, scored a four-length win in the Carlton Draught Maiden (1200m).

As they do with great success, the trainers gave The Brumby a preparation in their Melbourne stable and he debuted on the synthetic track at Pakenham on June 1 making good ground to finish fifth before returning to South Australia.

Back at Kildalton Park, Angaston, the gelding trained on strongly for today’s race.

Vorster had the two-year-old away well and dropped him in behind the front runners coming to the turn.

Once in the straight, he found a gap and The Brumby sprinted powerfully to win easily.

Trainer Calvin McEvoy thought it was an excellent win.

“I was very impressed,” McEvoy said.

“A two-year-old having just his second start against the older horses, going from a synthetic to a quite a soft track, he was very impressive.

“We’ve always liked him, he has got a beautiful action and good attitude.

“We think he will improve out over further.

“It was decided to keep him at the 1200 (metres) on a big spacious track but I think he will be better when he gets out over more ground.”

McEvoy said Wayne Mitchell’s Pipeliner Bloodstock was in the ownership group with a host of other enthusiasts.

“Well done to Wayne, he has the majority of the horse, then there is a lot of small shareholders, so it is a fantastic result for everyone.”

“I was a bit concerned going around to the barriers, he was a bit keen getting his head up a bit.

“As soon as the gates opened and he got a bit of cover he settled beautifully for me.

“It was just a matter of waiting to see which horses were going to move which way.

“I would have been happy enough to come out, but he was travelling well enough for me to be patient and wait for the gaps to open.

“He quickened through and it was a really nice win.

“Every time I asked him he quickened, and it was a creditable win and exciting to see where he goes.”