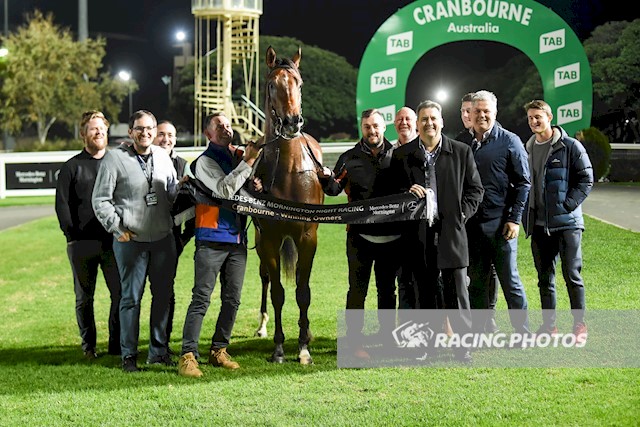 The Astrologist in spotlight

Trainer Tony McEvoy looked into the future and declared The Astrologist was a Saturday class performer after the two-year-old won at Cranbourne on Friday, May 17.

McEvoy stopped short of declaring him a star but was confident he had better wins ahead.

Backed from $3.80 into $3.50 favourite The Astrologist, ridden by Dwayne Dunn, scored a three-quarter length win in the Designer Coolrooms Maiden (1200m) beating Noble Fight ($6.50) with Nicconi Storm ($9.50), a half-length away third.

The gelding didn’t begin quickly but Dunn rode him hard to grab the spot outside the leader on settling down, then sent him for home past the 100 metre maiden to win nicely.

McEvoy said it had been a pleasing win.

“He didn’t jump that cleanly and Dwayne knowing we were at Cranbourne couldn’t allow him to drop out,” McEvoy said.

“He dug him up and went forward. I don’t think the way we rode him tonight is the way to ride him in the future, but he got the job done.

“I think he can go to town now; I mean the pressure he was under early he was entitled to get a bit tired first up and he stuck it out really well.

“I think he’ll improve a lot out of tonight, and yes, I think he is a Saturday class performer.

“The owners Bennett Racing are good supporters of the stable and I like the way Nathan and his team are going about it, they have a lot of young owners coming into the game and I’m pleased to be part of their success.”

Winning jockey Dwayne Dunn was impressed by The Astrologist’s win.

“It was a messy race and didn’t look pretty” Dunn said, “he didn’t jump well and then was in an early bumping duel.

“He didn’t get much peace but got the job done.

“Tony (McEvoy) presents his horses really fit, and the other strong to his bow is the further they go the better he’ll get.

“We knew race experience was going to take him a long way tonight, he had trialled up really well, so we expected him to run well.

“The more he does, the further he goes, the better he’s going to get.”