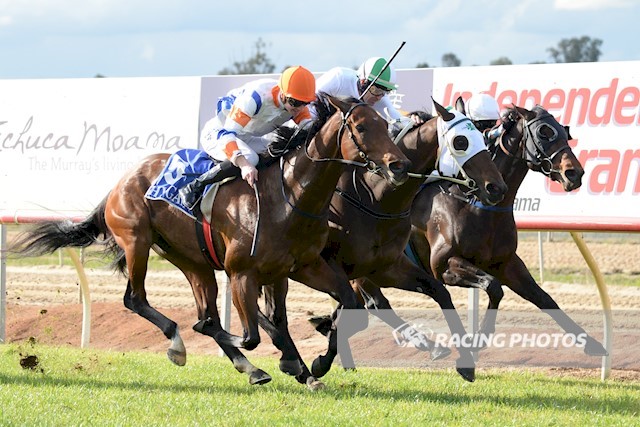 Talented mare Sweet Mischief might have had to share the spoils at Echuca on Sunday, June 16 but trainer Tony McEvoy would have been delighted with the run.

Not really comfortable on the soft seven track, Sweet Mischief ($2.80 fav), ridden by Jye McNeil, toughed out a deadheat win with He Ekscels ($2.90) in the Murphy’s Turf/Landscaping Benchmark 78 Handicap (2100m).

It was only the four-year-old mare’s second run from a spell which added even further merit to sharing the win.

Sweet Mischief now has four wins and four placings from just 16 starts and is developing into a good middle-distance performer.

She began beautifully from gate one, but McNeil handed up the lead to the other dead heater going into the back straight.

Coming off the fence, McNeil sat just astern of the leader until the speed increased with 800 metres to travel.

Sweet Mischief joined He Ekscels and the pair went stride for stride to the post with the judge unable to split them.

Jockey Jye McNeil wasn’t sure if the mare had won at the finish.

“Leading up to the post I had her head in front but on the line, I was hoping,” McNeil said.

“I’ll settle for the deadheat.

“Second up and stepping up in trip it was a top performance.

“On the wet ground she never really handled it at any stage, if it had been a better surface, I’m sure she would have won it solely.”