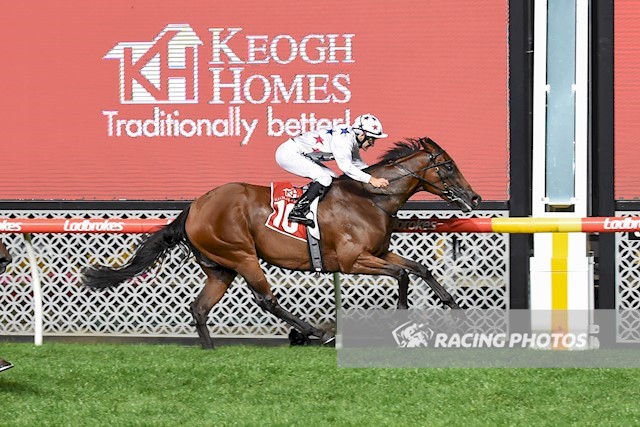 Champion three-year-old filly Sunlight stamped herself as one of Australia’s racing stars with a dominant win in the Group One Keogh Homes William Reid Stakes (1200m) at Moonee Valley on Friday, March 22.

It was the Tony McEvoy-trained filly’s third Group One success in the space of five months adding to the Coolmore and Newmarket which followed her Magic Millions victory as a two-year-old.

Jockey Luke Currie had the filly away brilliantly and after an early “arm wrestle” with Written By for the lead, went clear and the filly could not be caught.

The victory was the fifth Group One success for trainer Tony McEvoy in the 2018/2019 season and he admits to being in awe of his star filly.

“What a star,” McEvoy said.

“When she flew the start like she did, Luke was going to take the race by the scruff of the neck.

“Luke has got so much faith in her and knows what he can and cannot do.

“He rides her so well and I had such great confidence in the filly.

“It stands the hair up on the back of my neck when you think of the level she is up with now and with the great horses of the past.

McEvoy said Sunlight was now truly one of the sprint stars of Australia and that there might be so much more to come.

“The thing I love about the ownership group of this filly is that they appreciate how lucky they are.”

McEvoy said Sunlight would now head to Sydney to verify her position as among the country’s leading sprinters.

‘’That’s where the best sprinters go and that’s where we’ll head with her now,’’ McEvoy said.

Winning jockey Luke Currie said what Sunlight had done during her career was amazing.

“She was as quick early tonight as she has ever been.

“I suppose the best need to have the x-factor to be as good as they are, and she does.”