McEvoy Mitchell RacingLatest News Stepping out of the Sunlight 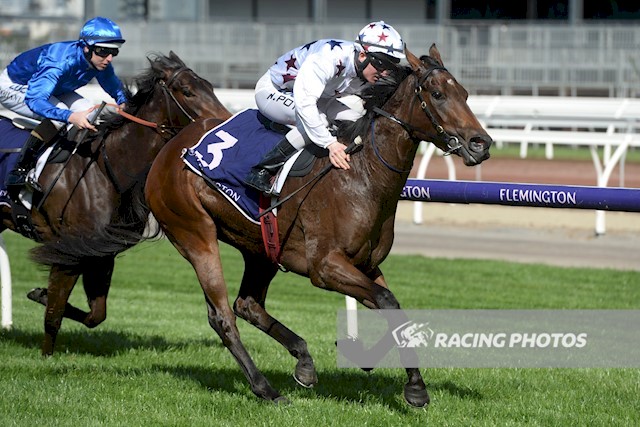 Stepping out of the Sunlight

Sisstar, a younger sister to multiple Group One winner Sunlight, took another step up her ladder of success, with an impressive win at Flemington on Wednesday, September 25.

Lightly raced Sisstar, trained by Tony & Calvin McEvoy, made it two wins in a row when she led throughout to win the Benchmark 64 Cup Week Handicap for three-year-old fillies over 1000 metres.

“Hopefully it’s the start of a good week in these colours,” said co-trainer Tony McEvoy said referring to Sunlight’s up-coming run in the Moir Stakes at Moonee Valley on Friday night.

“I was really impressed with this filly today.

“She’s got a very awkward style about her and has a lot to learn but she relaxed in the middle stages and then gave a kick at the end which was impressive.”

McEvoy said he took a lot of heart from the feedback jockey Barend Vorster gave him after Sisstar was successful at Murray Bridge.

“He gave her a really good report after that race, which gave me the confidence to come to a race like this,” McEvoy said.

“The middle stages, the way she relaxed, I think we can step her up a little further so we might go back to a little bit of black type now.”

McEvoy indicated the Group Three Thoroughbred Club Stakes at Caulfield on October 12 and the Listed Crockett Stakes at The Valley two weeks later were on Sisstar’s agenda.

He said it was vital the filly had experienced straight track racing previously at Flemington.

“She ran beautifully here on Melbourne Cup day and had a trial down the straight as well.

“It’s as big advantage once they have seen it.”

Winning jockey Michael Poy said it had been an honour to ride Sisstar.

“What a privilege to have a ride for Tony and Calvin McEvoy,” Poy said.

“This horse has taken a while to put it together but has shown the ability early.

“She is a jump and run type of filly.

“She is not the easiest ride and does try to over-race and get her head up.

“Tony said to go out with soft hands and keep her relaxed, keep those hands down and the filly would run a nice race.

“The first furlong was a bit touch-and-go, we had a bit of pressure, but Tony gave me clear instructions and we knew what we were doing.

“After that first 100 metres she relaxed nicely, went straight and won nicely, hopefully she can go on with it.”