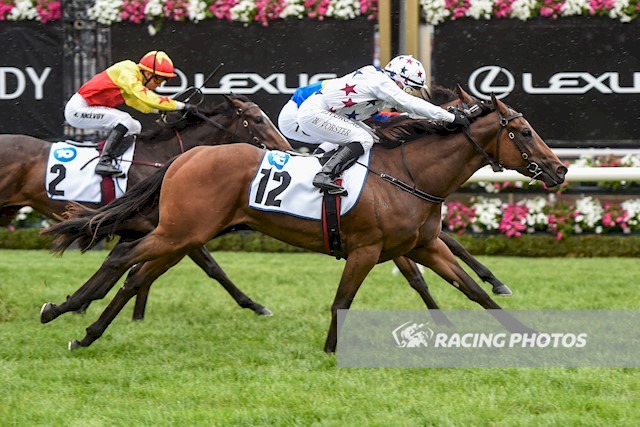 Anything her famous sister can do, so can the very promising three-year-old filly Sisstar.

Winning a black type race down the straight at Flemington was ticked off for Sunlight’s younger sister in the Group 3 Network 10 Red Roses Stakes (1100m) on Thursday, November 7.

Backed from 16/1 into 10/1, Sisstar, ridden by Barend Vorster, scored a half neck win for trainers Tony and Calvin McEvoy beating Niccovi ($6.50) with the $2.30 favourite California Zimbol, three-quarters of a length away third.

Sisstar showed the same guts and determination as her Group I-winning sister leading throughout and holding off her late challengers.

Trainer Tony McEvoy said the filly had been impressive.

“To win a Group 3 with this filly is a big reward to everyone who had been prepared to pay big money for her,” he said.

“She was fantastic today, very strong, she was there to be beaten and she is a real quality filly.

“Sisstar has an awkward racing style and Barend knows her very well and the ownership group were happy to bring him across from Adelaide and it has been a perfect result for everyone.

“Sisstar doesn’t like being trained out of our Flemington stables, she is a very fizzy filly, so we train her out of Angaston where the country environment really suits her, then we bring her back to race.

“She’s half the size of Sunlight and obviously with a huge pedigree and is now a stakes winner.

“She’s stakes placed as well. She’s worth a lot of money and a great ownership group – a lot of the same owners as Sunlight.”

McEvoy said Sisstar would now go to the paddock before being aimed at the Group I Robert Sangster Stakes at Morphettville.

For the winning jockey Barend Vorster, his first major win in Australia was in the Group One Newmarket on Sunlight at Flemington, so it was fantastic to win on her sister Sisstar in a Group Three today.

“With a team like this, these colours, family like breeding they have, this is an absolute pleasure,” Vorster said.

“It is such a pleasure to ride for Tony and Calvin.

“I’ve had quite a bit to do with the filly to get to relax, and once we did that, she furnished into herself

“I’m really happy with the level she has gotten up to now and I think she is going to keep going.

“She jumped so cleanly and she just kept running. I anticipated I would come a little bit further (wider) out but once you were near the grandstand, she was a little bit inclined to hang back in, so I had to keep straightening her and keep her going.

“It was a great effort from her and a great training effort from Tony. He keeps her up at Angaston and does most of her work there. He brings her up here and she gets her head down when it counts.”