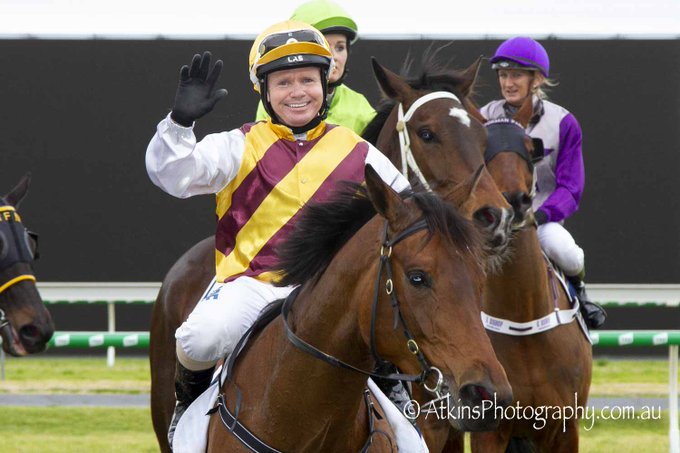 Shop Til I Drop’s brilliant sprint

Basically given no hope turning for home as she was well back in the field, Shop Til I Drop ($8)  sprinted brilliantly for jockey Barend Vorster to score running away by a length from Hasta La War ($5 favourite) with First Three Legs ($61) a head away third.

The lightly raced mare now has won two races in a row and the victory brought up a double for trainer Tony McEvoy and Vorster who had won earlier with Aten.

Assistant trainer Calvin McEvoy was impressed by the win.

“There has been a bit of talk around the track that it had been a bit leaderish today,” McEvoy said.

“Dad rang me and said not to change anything and to ride her like we did when she won at Murray Bridge.

“He took his medicine early and let her race where she was happy.

“When the gap presented, she was fantastic and really strong through the line.

“Well done to the owners Graham and Linda Huddy.

“The improvement she has taken since Murray Bridge has been fantastic, she was glowing today.

“We’ve noticed her go to another level at home and though she would be well placed today.”

“She’s little but she’s got a big heart and that’s what counts in these races,” Vorster said.

“I bided my time on her early and there wasn’t too much speed on.

“The pace picked up halfway through and I was able to tack on to the right horse.

“In the straight she really quickened in the sprint to the post.

“Once she got there, she ran away from them and it was quite a comfortable win.

“I’m sure Tony will place her in the right races, and she’ll be okay.”