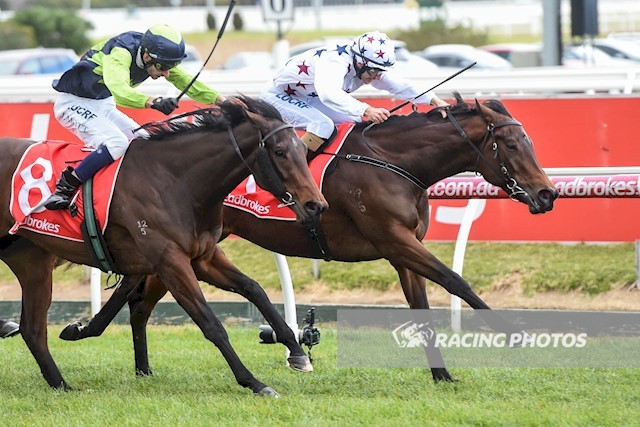 Outstanding filly Sunlight returned to her best form with a game in the Group 3 $150,000 Quezette Stakes (110m) at Caulfield on Saturday, August 18.

A drifter in betting to $4.20, Sunlight had a half-head margin over $8 chance Humma Humma, with three-quarters of a length to Thrillster ($17) in third place.

The victory gave trainer Tony McEvoy a winning Caulfield double as Miss Siska had won well in the opening event.

McEvoy said there was improvement to come from Sunlight.

“That was tough and there’s more to come,” the trainer said.

“The reason I gave her a busy time in her two-year-old days was that she kept putting weight on and it’s a little bit the same this time.

“She’s blown up a little and she’s only going to get better. Three-deep facing that wind and carrying the (weight) penalty. It was fabulous.”

McEvoy never lost faith saying after the filly’s first up defeat by Nature Strip in Adelaide saying he’d left plenty in the tank for a spring campaign with the Group One Coolmore Stud Stakes at Flemington in November her goal.

“We went in with a light prep into that first-up run,” McEvoy said.

“It fitted where I wanted to go with her and knowing her as well as I do she takes a bit of work to get her fit.

“She blew out in Adelaide and was beaten by a pretty handy horse but today she was in for a fight and was the Sunlight of old.”

McEvoy has the Danehill Stakes at Flemington on September 15 as Sunlight’s next likely engagement before the Coolmore Stud Stakes.