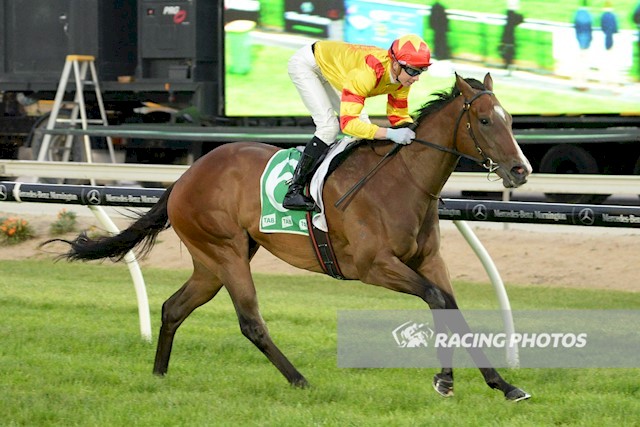 Rider Jye McNeil eased the filly down over the final 50 metres to win by 3-1/2 lengths from The Barricades ($9) with Durability ($21), a length away third.

Grand Scholar began well from an inside gate to hold the lead early but found herself being challenged early before kicking away going past the 400 metre mark.

The daughter of Wandjina quickly put a break of five lengths on her rivals.

Going past the infield screen McNeil could see the filly had the race won so eased her down over the final stages.

Grand Scholar is owned by Sun Bloodstock Pty Ltd and was purchased by them for $120,000 at the 2018 Gold Cost Yearling sale.

Melbourne McEvoy stable spokesman Tim Hanley said it had “been an easy watch.”

“Jye mentioned pre-race he thought there was nothing wrong with the inside,” Hanley said.

“He was happy to go through there and she obviously handled the going.”

Hanley said the stable believed the filly was capable of stepping up to better company.

“I’m not sure what Tony and Calvin have planned for her this time in,” he said.

“I think they’ll be happy to get that first win out of the way and go from there.”

Winning jockey Jye McNeil was impressed by the victory.

“She certainly does have a bit of a motor,” McNeil said.

“Pre-race there was a b it of a query about the wet track, but she handled it okay.

“A very nice filly on the up.

“She looked fantastic in the yard, so I rode her like the best horse in the race and she was way too good.