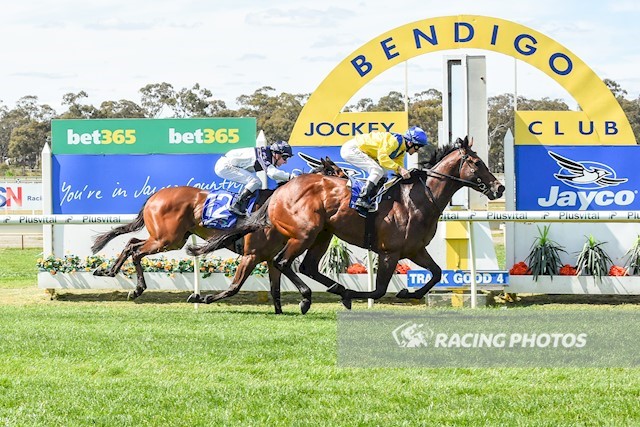 The colt debuted with a second at Murray Bridge earlier in the month, but today responded to jockey Luke Currie to win The Big Screen Company Three-Year-Old Maiden (1300m).

The $3.10 favourite, Royalty was given the run of the race by Currie before hitting the line strongly to score by three-quarters of a length from Quantum Mechanic ($6) with Highland Jakk ($16), 2-1/2 lengths away third.

Co-trainer Tony McEvoy said the son of Fastnet Rock was taking time to learn his craft.

“He didn’t help Luke much at all today.

“It was good to have someone with the experience and vigor of Luke today to get this big fellow concentrating.

“The stock of Fastnet Rock jump out of the ground in blinkers so we still have that up our sleeves if we need them.

“He’s such a big lump of a horse, I have to get weight off him and get him more athletic and that is something it is going to take time to do.”

“He rarely touched the bridle through the race, but I felt if I stopped riding him, he would have pulled up and cruised around.

“He might want some head gear in the future, but he’s got to learn first.

“You only need to look at him – he’s a beautiful animal so I think there will be better races in him.

“He’s a big heavy horse who is going to improve himself not only mentally, but physically, with racing.”