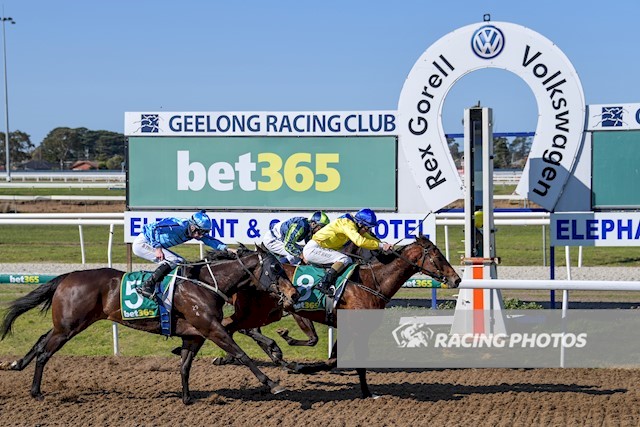 Trainer Tony McEvoy said the win of Roobeena on the Geelong Synthetic track on Tuesday, August 14 was a “nice sign for the future.”

Despite still showing signs of immaturity, Roobeena ($2.35), ridden by Luke Currie, finished strongly to win the Geelong Homes Maiden (1100m) by a neck from Vescio ($2.10 fav) with Miss Inception ($10), a head away third.

“I really liked what I saw,” McEvoy said.

“She showed she was in for the fight when another horse raced alongside and really rallied to win well.”

Roobeena showed she was still learning about racing when Currie pulled her to the centre of the track turning for home.

The filly was happy to look around rather than knuckling down, but when Miss Inception moved up alongside, Roobeena responded to Currie’s urgings and raced to the line strongly.

McEvoy said the three-year-old filly had also wobbled a bit around the home turn.

“She will take a lot of out the race and should have a good campaign.”

“The horse on the outside helped us when it came alongside,” Currie said.

“She was having a look around but quickly gathered in the leader when she started racing.

“I think she will be better with a quiet ride early, and when she gets out in distance.”