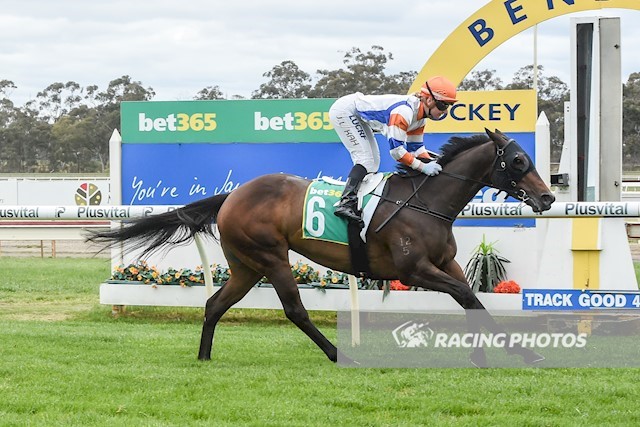 Rivals left in her wake

Talented mare In Heart’s Wake, left rivals in her wake, with a dominant win at Bendigo on Wednesday, October 9.

The victory was the mare’s third from just 12 starts for trainers Tony and Calvin McEvoy and connections are hoping she is starting to mature after being headstrong as a younger horse.

“The mare has really matured mentally, and it was a great ride by Jamie,” Shepherdson said.

“Jamie got her in a beautiful rhythm and the speed was just right.

“Her last run really brought her on and her fitness was much improved today and she paraded really well.

“Jamie knows her really well because she can be quite fussy.

“It was good for Camille who looks after the mare because she hasn’t been straight forward and done a really good job with her.”

Despite In Heart’s Wake having some attitude, Jamie Kah said she had always liked the mare.

“She’s always been one of my favourite horses at McEvoys,” Kah said.

“She’s such a tough thing, but also very temperamental.

“I think a few preparations ago she kicked me about five times, so she is now totally paying me back for it.

“We were able to stay out of trouble and she won well.”