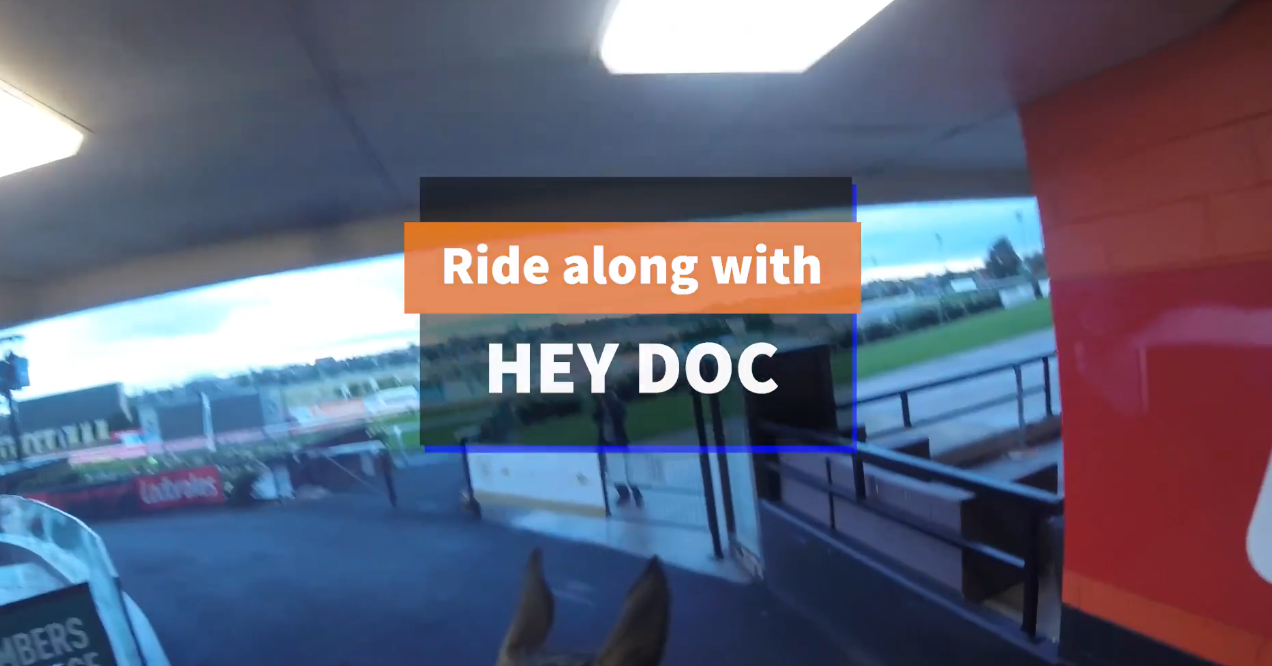 Ride along with Hey Doc

Three-time Group One winner Hey Doc returns to Moonee Valley on Friday night hoping to win the Manikato Stakes, a race he won three years ago.

Ride along with Hey Doc and regular rider Camille Piantoni’, at Moonee Valley on 17/10/20.

Ride along with HEY DOC from McEvoy Mitchell Racing on Vimeo.

Now a seven-year-old, Hey Doc will forever be a favourite of trainers Tony & Calvin McEvoy.

The gelding gave Tony his first Group One win for McEvoy Mitchell Racing in the Australian Guineas at Flemington in 2017, then gave the father-son training partnership their first Group One victory in the Winterbottom Stakes at Ascot last year.

Another constant has been Hey Doc’s strapper Camille Piantoni who has enjoyed the journey.

“I fell in love with Hey Doc the first time I rode him,” Piantoni said.

“I feel very fortunate that I have had him in my life.”

The French woman, who has worked with horses for 18 years, decided to come to Australia to gain more experience with thoroughbreds and found herself joining McEvoy Mitchell Racing in late 2016.

“I was asked to ride Hey Doc work when he was an early three-year-old and have loved being part of his career, watching him grow and improve.”

Piantoni said she was sure Hey Doc knew he was about to tackle a feature race on Friday.

“Every time he goes to the Valley, he knows it is for something special.

“I could tell on Saturday morning when we took him there to gallop, he was happy to be back.

“I worked him over 1000 metres coming home the last 400 metres in 26 seconds – he loved it and I was sure he enjoyed being back.

“On Sunday he just had a swim in the pool, then on Monday cantered two laps around the Flemington sand track.”

Hey Doc returned to Moonee Valley on Tuesday for a final gallop with race rider Luke Currie in the saddle.

“Luke said he seemed a bit casual, but I wasn’t worried because I’m sure it was just because he enjoys galloping there.”

Hey Doc headed down to the beach on Wednesday morning for a wade in the water, but unfortunately not with his strapper.

Piantoni was in a Melbourne hospital having x-rays on her right shoulder after a trackwork fall at Flemington earlier in the day.

“I was riding a two-year-old which took fright at something and spun around causing me to lose my balance and come off landing on my right shoulder.

“Even though there was a lot of pain, my immediate thought was about being with Hey Doc on Friday night.

“I’ll be doing everything I can to be with him on Friday. It will be strange with no crowd but he will give his best.”

Stable jockey Luke Currie was also involved in a fall during the week, when Xilong reared and dislodged him while in the starting gates on Wednesday at Geelong Racecourse.

Currie, who has spent much of 2020 on the sideline with a neck injury following a fall at The Valley in February, told us that he has come through this weeks incident relatively unscathed.

“I was a little stiff and sore initially, but had a good sleep on Wednesday night and will be one-hundred percent to ride Hey Doc on Friday night,” said Currie.

Hey Doc already has an amazing record of nine wins and five placings from just 27 starts earning $2,378,300 in stakes after being picked out by McEvoy Mitchell at the 2015 Melbourne Premier Yearling Sale and purchased for $85,000.

He won the race in 2017 leading throughout and beating In Her Time.

Hey Doc has had two runs from a spell finishing close up in the Moir Stakes (1000m) then was beaten less than a length when fourth in the Schillaci Stakes.

Piantoni is confident her favourite is ready to give his best attempting a second win in the Moonee Valley feature.